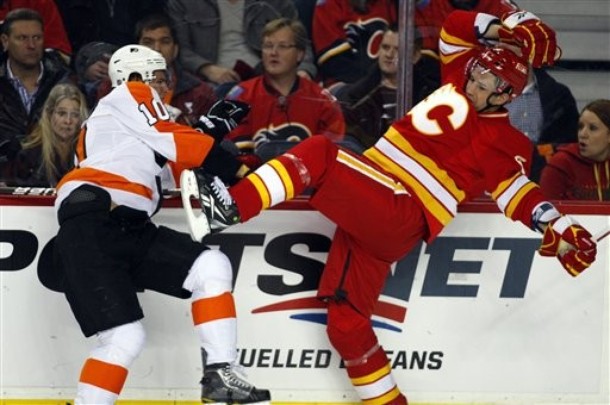 The Western Conference road trip that the Flyers began this week hasn’t gone according to plan, but the Flyers managed a repeat performance of their comeback win against the Winnipeg Jets by overcoming the Calgary Flames in a gutsy shootout win.

The first period was a listless effort from the Flyers along with a poor outing by Ilya Bryzgalov in net. A powerplay goal from defenseman Mark Giordano put the Flames on the board while a weak wrister from Matt Stajan made it 2-0, both in the first 5 1/2 minutes.

The officials tonight were the same as in the game against Edmonton and awarded the Flyers a lot of powerplay chances. Unfortunately, special teams continue to be a major issue, as the Flyers gave up another shorthanded goal midway through the second period.

Down 3-0, the Flyers could have called it quits, but give them credit for taking complete control of the second half of the game.

Jake Voracek tallied his 11th goal of the season at the 15:47 mark and Braydon Coburn was fortunate enough to score one of his own off of Flames defenseman Scott Hannan.

Scott Hartnell tied the game in the third period, re-directing a shot from Kimmo Timonen on a  5-on-3 powerplay.

Minutes later, Alex Tanguay of the Flames was hooked by defenseman Pavel Kubina after a breakaway attempt and awarded a penalty shot.  It was a bit of a weak call against Kubina, but the officials had given the Flyers a lot of powerplay time up until that point. Tanguay converted on the attempt, grabbing the lead again.

It was the last time they held a lead in the game, as Hartnell once more tied the game. Nicklas Grossman was able to take advantage of a great screen by Hartnell in the crease, who then redirected his shot past Miikka Kiprusoff.

Tonight, that all changed. Bryzgalov made several impressive saves on the likes of Olli Jokinen, Alex Tanguay, Jarome Iginla and Curtis Glencross. Mike Cammalleri scored, but the Claude Giroux and Matt Read each scored against Kiprusoff for the win.

It’s disconcerting that, for the umpteenth time, the team failed to get off to a good start and let their opponent score first. It’s fantastic that the character in the room has such great resiliency, but character alone isn’t going to take them far into the postseason. Laviolette’s priority should be figuring out how to clean up the mess that the penalty kill (and, to a lesser degree, the powerplay) has become.

On a more positive note, Pavel Kubina and Grossman each played very solid games. Grossman had two assists and wasn’t on the ice for any of the Flames goals against.

The Flyers wrap up their road trip on Tuesday with another late game against the San Jose Sharks. With the win tonight, they are now tied with Pittsburgh in points and are just one point ahead of New Jersey.  It’s going to be a battle between these three teams for the rest of the season for home ice advantage in the first round of the playoffs.

Recap Of Philly’s College Basketball Weekend: 5 of 6 Schools Still In The Hunt

defense is solidified, goaltending needs to get better. bryzgalov is capable of much better and i believe he will be as he plays more. if he raises his game to where he has played the last couple seasons they will be tough to beat. they have 4 lines and 3 solid d pairings now

kubina and grossman’s toughness is a big help

Maybe Bryz and the team need to stay on the Road and get away fromt he distractions of being at home.. I think the Eagles are the same way, get out on the road and develop that us against them mentality which is harder to develop when home for long stretches at a time..

Bryz is horrid!!! They better hope that the league agrees to an amnesty clause, in the new CBA, or they are stuck with this stiff for 8 more seasons. I have ZERO
confidence, that they can even win a series, with these goaltenders. I don’t care how many trades Holmgren makes. They are brutal to watch in goal. I still can’t believe that they won a shoot out.