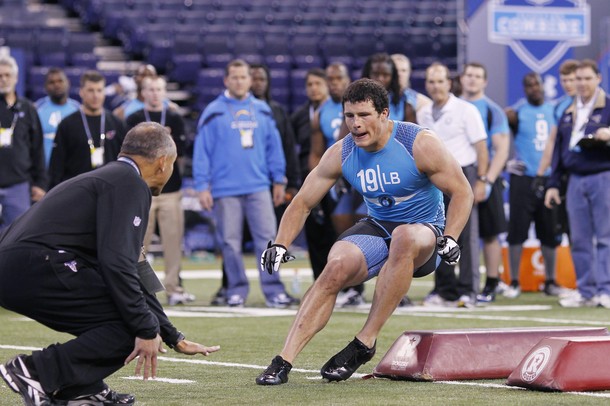 Unfortunately for the Eagles, he might have run so fast that he’ll wind up getting drafted well ahead of the 15 spot.  Right now, I think the Birds will need to move up to get him.

The great disparity in the forty times led some of the scouts to ask Kuechly to run one last forty-yard dash and he ran a 4.59 to again eliminate questions about his speed.

In the standing broad jump, Kuechly jumped 10’3″, which is very impressive.  Next up, he had a 38 inch vertical jump.  It shows tremendous explosiveness.

Kuechly weighed in at 241 pounds.

North Carolina’s Zach Brown ran a blazing 4.45 even though he seemed to pull up during the sprint.

Vontaze Burfict hurt himself during his first forty-yard dash by running a 4.93.  Burfict is a major question mark to a lot of the scouts.