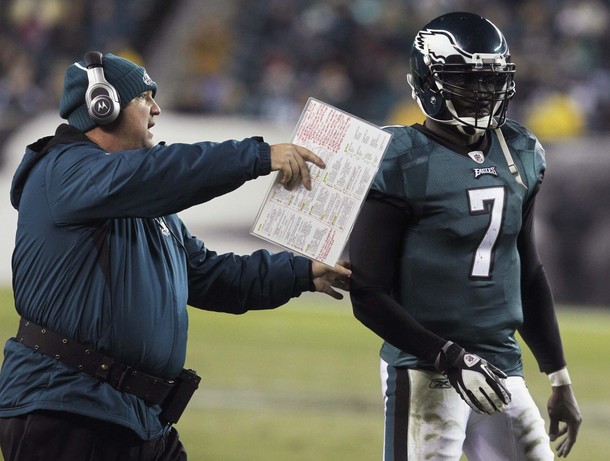 Eagles offensive coordinator Marty Mornhinweg told Chris McPherson of PhiladelphiaEagles.com quarterback Michael Vick has been virtually living in the building at the Nova Care Complex so far this off season. That’s a must as far as I’m concerned because he’s the key to their season.  If Vick plays great, the Eagles will play great, if he doesn’t then the Andy Reid era here in Philly will be drawing to a close.

The offensive coordinator says the Birds are going through the process of evaluating their offensive schemes so that they can do a better job of taking care of the football and avoiding turnovers.   He talked about the turnovers occurring in many different ways a year ago.

Mornhinweg says he’s been looking forward to getting this opportunity to spend an off season with Vick.   According to him, Vick feels the same way.

The former Detroit Lions head coach said the Eagles starting quarterback had made some improvements at the beginning of last season regarding his ability to recognize coverages and run the offense, but according to Mornhinweg you couldn’t see the progress because they were losing so many games.

The Eagles play caller feels confident about Vick and he mentioned that the quarterback was on a pace during the first part of the season to throw for 4000 yards and rush for a 1000 yards, which has never been done before.

He talked about having confidence in Mike Kafka as a good backup.  Mornhinweg then went onto praise the recently-signed Trent Edwards.   He talked about his strong arm and toughness.   didn’t say anything negative about Vince Young, but he did mention that Edwards was very smart.

It’s Time For The Birds To Send Asante Samuel Elsewhere