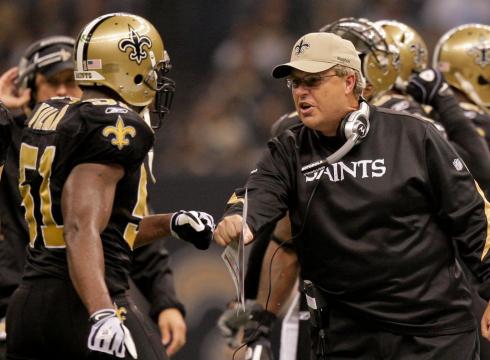 ESPN has reported that former New Orleans Saints defensive coordinator and current St. Louis Rams defensive boss Gregg Williams is headed to the NFL League Office in New York today, to discuss the “Bounty System” which he had in place for the last three years with the Saints.  He’s in some major hot water for having a pot of about $50,000 to give out to player who knocked opposing players out of games.

According to the report, Saints defensive players would receive $1500 for “knockouts” and $1000 for “cart offs”.

He and his players are in major trouble because they ended Cardinals quarterback Kurt Warner’s career with big hits during a playoff game and they beat up former Packers quarterback Brett Favre during an NFL Championship game.

Not only are Williams and the players in hot water, but Saints head coach Sean Payton and team GM Mickey Loomis.

My former coach Buddy Ryan never needed to put together a “bounty system” for the Philadelphia Eagles when he was a coach.  It was simple if you had a good shot at an opponent, you took it.  He always encouraged us to deliver as much punishment as possible.  If you got a chance to knock a guy out of a game, you took it.  No Mercy.  Intimidate.

We as players did give each other small amounts of money for big hits, interceptions, caused fumbles and fumble recoveries.  This was a regular thing throughout the NFL.

The coaches knew it was going on, but they weren’t really a part of it.   They would just make like they didn’t hear or know about it.  Some of the coaches who were former players might talk about it some, but it was for the most part a player thing.

We went into games looking for the opportunity to deliver big hits. It was part of the job and understood by all the other players on the field.  We wanted our hits to be legal and clean, but we wanted to intimidate our opponents when given the opportunity.