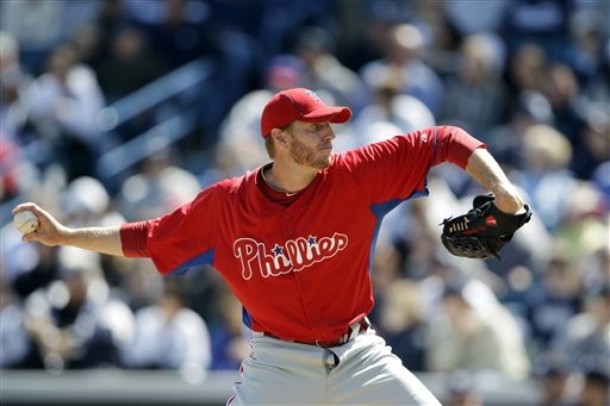 The Phillies dropped their second game of Grapefruit League play on Sunday to the New York Yankees, losing 7-4. For the second straight game, Philadelphia got out to a 2-0 lead, only to see it disappear with the help of struggling relievers and defensive errors.

based on what paulman, two innings from roy, cole, just starting to incite again, why not wait until it matters, things must be really slow at gcobb and down in appalachia, why not check out a good baseball game at appalachian state?

App State rolled over Rider in a 4 Game Sweep and outscored them like 55-10 or something crzy.. App States Baseball Coach (Pollard) lives right down below me and has done super job with App States Baseball Program which is not easy to do with our harsher winters up here in the Mountains than programs down in Piedmont/Coastal Regions where they can play outdoors a good 10 months a year.. App State beat 7th Ranked LSU Tigers who were ranked #7th in the Nation in a 3 game s Set (won 2 of 3) down in Baton Rouge which is pretty impressive

It’s way to early to draw any conclusions..Fantasy leaguers, go play with the penis.

Phils Window is closing rapidly, way too old/injured in their everyday line-up and
the Top End of the Rotation (Halladay/Lee) are not what they were 2 Seasons ago.. Hamels will have the best season of the Top 3 and then will bolt out to the West Coast in Free-Agency to the Dodgers and will be teamed up with Kershaw,Billingsly and Hamels to give the Dogers the Top 3 IN the NL moving forward in 2013..