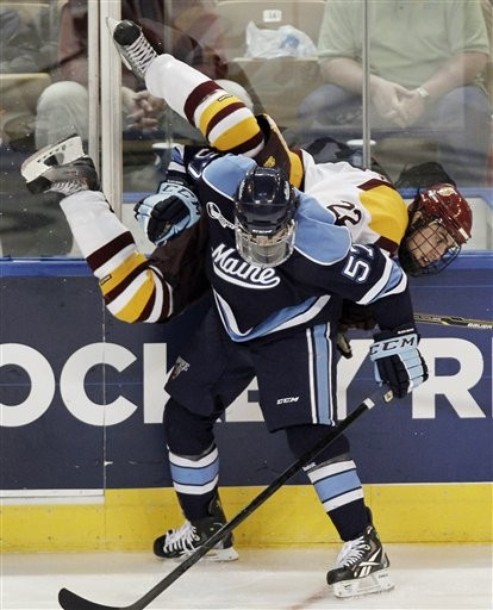 Continuing the trend of building their farm system through free agency, the Flyers  announced today that they have signed junior defenseman Matt Mangene from the University of Maine along with defenseman Matt Konan from the Medicine Hat Tigers of the WHL.

Mangene, 23, had a breakout season with the Black Bears as he produced 16 goals and 34 points through 40 games played. Listed as 5’-10” or 5’-11” depending on where you look, Mangene appears to be a very talented offensive defenseman who is able to make up for his lack of size with his work ethic.

Interestingly enough, Mangene has been known to switch from defenseman to forward throughout his career, depending on what the team needed from him. The Flyers labeled him as “D/F,” so where they envision him playing is up in the air.

Mangene announced on twitter, “Thank you everyone for the support. Happy to be a part of the Philadelphia Flyer[s] Organization.”

Konan, 21, also had a breakout year with the Tigers. He finished this season with 9 goals and 54 points in 72 games played. Konan is 6’-3” and has been a steady blueliner at the junior level for the last four years.

Konan’s size helps improve the picture of this signing, although his most successful season came at a point when he was a man playing among boys.

Konan also expressed his  gratitude for the signing on twitter: “Thanks to my family, friends, and supporters who never stopped believing in me. I wanna thank the Philadelphia Flyers for this opportunity.”

The fact that the Flyers signed not one, but two defensemen raises a number of questions about the changes that will take place on the blueline in July. Including Erik Gustafsson, the Flyers will have nine defensemen at the AHL level.

This does NOT include Marc-Andre Bourdon, who will be a restricted free agent, and Cullen Eddy, an AHL defenseman for the Adirondack Phantoms who has been outplaying prospect Blake Kessel for ice time this season and was named today as the Phantoms’ candidate for the IOA/Amercian Specialty AHL Man of the Year.

The Flyers, meanwhile, have just Chris Pronger, Kimmo Timonen, Braydon Coburn, Andrej Meszaros, and Andreas Lilja under contract for next season. Several of the Phantoms could see themselves earn full promotions next season, including Mangene and Konan. Others may already have new destinations on the horizon that could be announced in the summer.