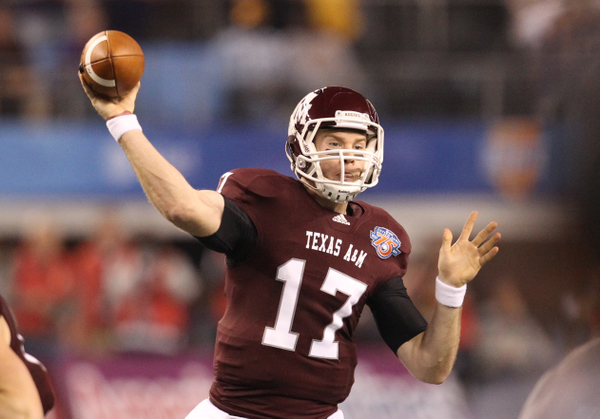 The Philadelphia Eagles are busy preparing for the draft and that includes taking a look at the top prospects in this year’s talent pool.  Yesterday they were at Texas A&M getting a close look at Ryan Tannehill.

Could the Eagles move up into the first five or ten picks to grab Tannehill?  I guess so, but it would be an amazing move when you consider all the needs they have elsewhere.

No one has looked at Michael Vick and the Eagles quarterback situation from the stand point that adding a talented young quarterback like Tannehill would put some heat on Vick.  I don’t think it does, but I do think the Eagles would like to have more competition at the position.

He played the best football of his career when he was backing up and competing with Kevin Kolb for the starting job.  You know the Jets feel Mark Sanchez needs competition in order to play his best football, perhaps the Birds feel the same way about Vick.

Personally, I think Andy Reid always dreams of what he can do with a young talented quarterback

According to Aaron Wilson of Scout.com, the Birds have worked out Notre Dame wide receiver Michael Floyd, who is a big receiver at 6’3″ 220 pounds.  Floyd doesn’t have big time speed but he seems to be a good fit for the west coast offense.

I don’t see how the Birds could draft him since he’s expected to go in the first round.  The Eagles have too many needs and there’s too much talent in their areas of need for Andy Reid and Howie Roseman to make Floyd their guy.  I think the same is true with Tannehill.

I think the Eagles are just doing their homework with the workouts of Tannehill and Floyd.

Chris Rainey Might Get The Chance To Challenge Chad Hall