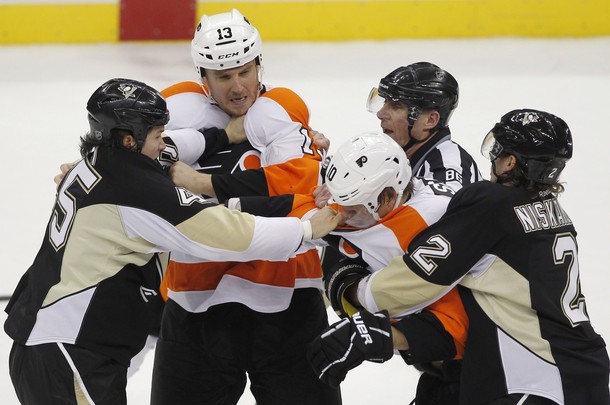 Thanks in part to the combined actions of fourth liner Joe Vitale and Philadelphia Flyers head coach Peter Laviolette, the inevitable 2012 Stanley Cup Quarterfinal series between the Flyers and the Pittsburgh Penguins has been ramped up in intensity and intrigue.

The Flyers announced today that both Danny Briere and defenseman Nicklas Grossmann will be out of the line-up this week as a result of the actions of Vitale in the Flyers’ 6-4 whomping of the Penguins on Sunday.

Grossmann left the game in the first period after Vitale recklessly collided with his knee. Grossmann has been known to have knee issues in the past and while it’s a bit conspiratorial to suggest that Vitale was targetting him specifically, the hit left the Flyers with just five defenseman for the majority of the game.

The Flyers expect Grossmann back in the next 7 to 10 days.

Perhaps more “controversial” was the open-ice hit on Danny Briere in the last two minutes of the game. The hit was completely legal, but the timing appeared suspect considering the game was already decided. Laviolette was so incensed by Vitale’s actions that he called Penguins coach Dan Bylsma “gutless” for putting his fourth line on the ice when the game was already over.

Briere will be out indefinitely with an upper back contusion as a result of the hit.

Penguins captain Sidney Crosby suggested that “Maybe [Laviolette] shouldn’t have put him out there.” It’s a fair point, except the NHL specifically has rules in place to deter teams from “sending messages” when the game had already been decided. In 2009, Flyers coach John Stevens was fined $10,000 after putting Dan Carcillo on the ice in the waning minutes of Game 1 of the playoffs, when Carcillo went AWOL on Max Talbot’s head.

At the time, the NHL’s disciplinarian Colin Campbell stated, “We had a conference call Monday with the General Managers and Coaches of playoff teams and told them explicitly we would not tolerate attempts by clubs to ‘send a message’ late in a game when the outcome had been determined.  Organizations – players and coaches – will be held accountable for such actions.”

By this logic, it’s a slam dunk for current NHL disciplinarian Brendan Shanahan to suspend Vitale and fine Bylsma for their actions. A three game suspension to Vitale would also keep him out of the final game of the season between the Flyers and Penguins, potentially deterring any “message-sending” from the Flyers back to Vitale.

Instead, the NHL elected to fine Penguins assistant coach Tony Granato $2,500 for his participation in the shouting match with Laviolette, who was himself fined $10,000.

With Briere out of the line-up, it’s basically a guarantee that Jody Shelley will be in the line-up on April 7. I wouldn’t be shocked if Vitale wasn’t challenged every time he stepped foot on the ice.

This is the one time I hope Shelly takes one for the team. If he gets suspended for the first round of the playoffs it really is not a big deal.

They need to take care of biz in the first round…play with some jam.

Are players supposed to stop playing the last couple minutes of a 2 goal game.. Briere had his head down skating up the center of the ice, which is a no-no for any Hockey player… So he got leveled, who cares, it’s a part of the sport and time for all the players to man-up and beat the Penquins in the Playoffs which is when it really matters

I’m sorry a clean hit, no matter when it happens, will never be suspended. Nor should it be. Anyone who’s ever played competitive hockey in their life, knows you play until the final whistle/horn. This isn’t basketball where you just dribble out the end of the game.

Laviolette should be upset with himself for putting out his second line in a 6-3 game with a minute left. The only possible explanation is that he was trying to run up the score and in that case karma can be cruel. Most smart coaches would put out their 4th line at the end of a blowout.

Great game by Philly though!

ssggoorrvveeaatt, I hear ya. I don’t think his hit “deserved” a suspension as much as I think there is an argument for “message sending,” but it’s all semantics anyway. The whole rule is suspect because it suggests the NHL has the right to decide what personnel the coach should and shouldn’t be allowed to put on the ice. I’ve just seen it argued against Philadelphia before when playing the Penguins.

I blame Briere more than Lavy for not being cognizant of his surroundings. He’s been around the NHL long enough to know better.