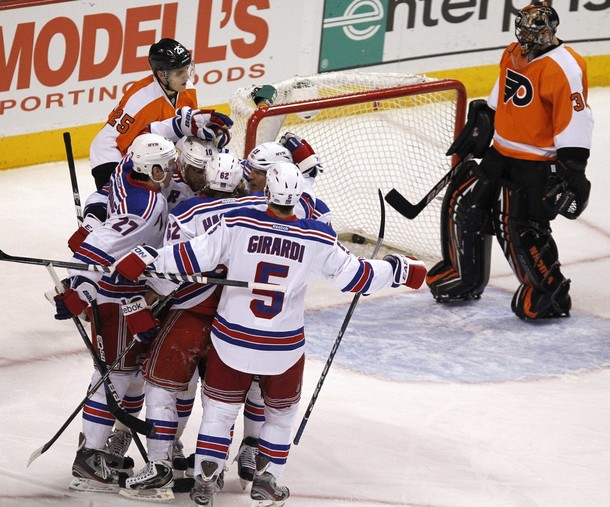 The New York Rangers clinched the first seed in the Eastern Conference for the first time since 1994 after holding onto the lead in a 5-3 win against the Philadelphia Flyers at the Wells Fargo Center.

The win also clinched a sweep of the season series between the two clubs.

“It burns,” said Wayne Simmonds about the series sweep. “I know for myself and everyone on this team, it’s eating us up inside.”

As has been the Flyers’ modus operandi for the majority of the season, they gave up the first goal to the Blueshirts early in the first period. Defenseman Ryan McDonagh finished a pass from Marian Gaborik that beat Ilya Bryzgalov, who made his first start since chipping a bone in his foot last week. McDonagh assisted on another goal five minutes later to Brian Boyle, who collected a rebound from Bryzgalov in front of a wide open net.

“Obviously I think we shot ourselves in the foot again with that start,” said Simmonds. “In the first five minutes, I thought we were good and then they scored that goal and it kind of fell apart.”

The death knell for the Flyers sounded in the waning minutes of the first period as Jaromir Jagr went to the box for hooking. Artem Anisimov blew right past Pavel Kubina at the blue line, rushing in on goal in spite of a blatant hook from Max Talbot (and a minor stick infraction from Marc-Andre Bourdon). Anisimov scored, but not before Kubina clipped him in the mouth.

The officials decided that since Kubina clipped him after the goal, the Rangers were due a powerplay from Bourdon as well as a 4:00 double minor from Kubina. Thirty-six seconds later, Ryan Callahan potted the fourth goal of the game with the two-man advantage.

The Flyers made a valiant effort to come back in the remaining forty minutes, but the Rangers aren’t a team that gives up all that many scoring chances.

“When they take a lead, especially in the third period, they just play simple hockey and shut the door down,” said Jake Voracek. “It’s very hard to get through their defense, they block a lot of shots. We’ve got to figure out what to do if we want to beat them in the playoffs.”

They were able to get under their skin and drew no less than six powerplays, but only one goal from Simmonds got through with the man advantage.

Voracek and Scott Hartnell were able to cut the deficit to two goals after giving up another powerplay goal to the Rangers. Simmonds, Voracek and Hartnell accounted for 19 of the 40 shots on goal for the Flyers.

“I think after the first period, we played two really good periods of hockey. Our guys didn’t quit. They fought, they showed a lot of guts by playing the last 40 minutes the way they did. They fought back into the game,  they kept pushing until the end to try to win. It’s just tough when you go down like that [in the first period],” said coach Peter Laviolette.

You can dissect the score sheet to try and determine what the Rangers did better than the Flyers that was the difference-maker all year, but it ultimately comes down to systems and goaltending. The Rangers play team defense much more consistently and have been able to expose the Flyers’ inability to hold them to the outside of the offensive zone.

Henrik Lundqvist also continued to show why he is deserving of the Vezina Trophy. After hurting his right harm on the ice following Simmonds’ goal, he still managed to stop 13 of 14 shots in the third period while the team in front took penalty after penalty.

Bryzgalov, meanwhile, struggled in the first period before finally settling in. His teammates all said he made “big saves,” but it didn’t appear like the time off helped him any.

There’s no easy answer for what the team needs to do in the playoffs other than play better at the start. Having Danny Briere, Nicklas Grossmann and James van Riemsdyk in the line-up should help if the Flyers meet the Rangers again in the later rounds, but there’s no guarantee any of them will be at 100%.