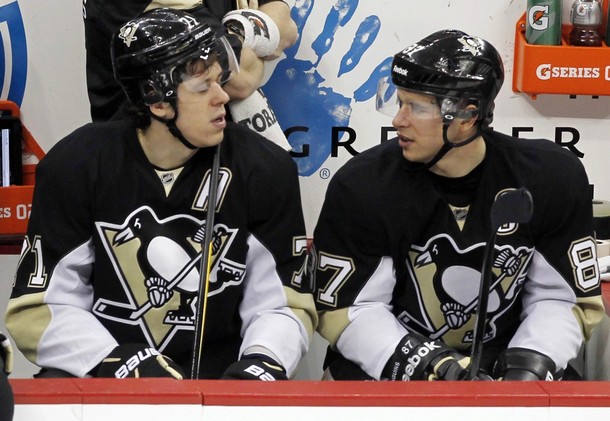 The Pittsburgh Penguins have been under scrutiny over the last two weeks from players, coaches and media personalities alike for a perceived “favoritism” from the NHL.

New York Rangers coach John Tortorella was fined $20,000 after complaining in front of cameras about Pittsburgh’s “two whining stars.” NHL commissioner Gary Bettman “clarified” on the New York radio station WFAN today that he was fined for dropping the F-bomb and not his criticisms, but common sense suggests that this is nonsense.

On the podcast “Marek Vs. Wyshynski” on Yahoo’s Puck Daddy Blog, former Philadelphia Flyer and current sports analyst Jeremy Roenick stated, “Pittsburgh’s untouchable. Let’s get that straight. If you say something bad about them, they’re going to complain, they’re going to whine, they’re going to revolt against you. The fans are going to bitch-slap you all over Twitter. They’re gonna attack you. God help anybody if you’re gonna say anything negative about the Pittsburgh Penguins. They’re like the almighty.”

Pick a random Flyers fan out of a crowd and you’ll likely get a similar answer- the Penguins are a dirty team that gets preferential treatment because of Sidney Crosby and Evgeni Malkin.

In the pursuit of remaining objective while covering the Flyers (to varying degrees of success), I try to maintain the perspective that believing in a conspiracy to benefit one team over another is ridiculous. There is no need to make up excuses for why the hated competition succeeds and the home team fails when they have a core of very talented players and receive excellent coaching.

What if it were true, though? Just how privileged are the Pittsburgh Penguins in reality?

The easiest way to point to one team receiving preferential treatment over another is by the number of penalties drawn for and against.

In the 2011-12 regular season, the Flyers received the highest amount of penalties minutes (1320) at a rate of 16.1 penalty minutes per game. Before you jump to the conclusion that they don’t receive fair treatment, they also drew 16.4 penalties per game, resulting in 15 more total powerplays for than against.

The Penguins finished with the 19th most penalty minutes, but tied for 4th in the league with the highest differential between penalties drawn versus penalties taken. Both the Penguins and the Carolina Hurricanes finished the regular season drawing 130 more penalty minutes than they took themselves. Only the Detroit Red Wings (150), San Jose Sharks (133) and New York Rangers (132) finished with a better differential.

The Flyers rank 12th in penalty minute differential. The Ottawa Senators, sitting in the 8th position in the 2012 Stanley Cup Quarterfinals, rank 30th with 147 more penalty minutes taken than drawn.

While these numbers don’t help the Penguins’ reputation much, it’s also worth noting that in the 2010-11 season, both the Flyers and Penguins finished with more penalties taken than drawn. Only the Rangers, Hurricanes and Toronto Maple Leafs drew more penalty minutes in the 100-range that season.

What about playoff success? What can history tell us?

In 2011, the Penguins received 82 penalty minutes to the Tampa Bay Lightning’s 96 in the first round.

In 2010, the Penguins received 67 penalty minutes to the Ottawa Senators’ 123 in the first round and 71 minutes to the Montreal Canadiens’ 72 in the second round.

As the Senators’ iced a plethora of borderline goons like Matt Carkner, Jarkko Ruutu and Zack Smith on their failed quest for the Cup in 2010, it’s not a shock that they earned nearly 60 more minutes in the sin bin. Otherwise, the Penguins didn’t receive that much help.

Their Stanley Cup victory in 2009?

If you buy into conspiracies, then the NHL *clearly* wanted the Penguins to make it to the Stanley Cup Finals, only to lose to the Red Wings… again. In the first three rounds, the Penguins earned two additional powerplays per game on average, but Detroit had double the opportunities of the Penguins in the Finals.

Based on recent history, it is likely that the first round set to open tomorrow night at the CONSOL Energy Center is going to be called extremely tight by the officials as they attempt to keep emotions from getting out of hand. Whether the Penguins receive more calls than the Flyers depends much more so on how disciplined each team remains versus phantom intangibles like organizational bias.

If any other conclusions can be drawn from the data, it’s that Malkin, Kris Letang, Brooks Orpik and Matt Cooke should be frequent targets of instigation. Those four individuals have been called for the most penalty minutes over the last three postseasons and are easy targets for the officials.

It’s Too Early To Be Concerned About The Phillies