The Keys To The Flyers Success Vs. The Penguins In Series 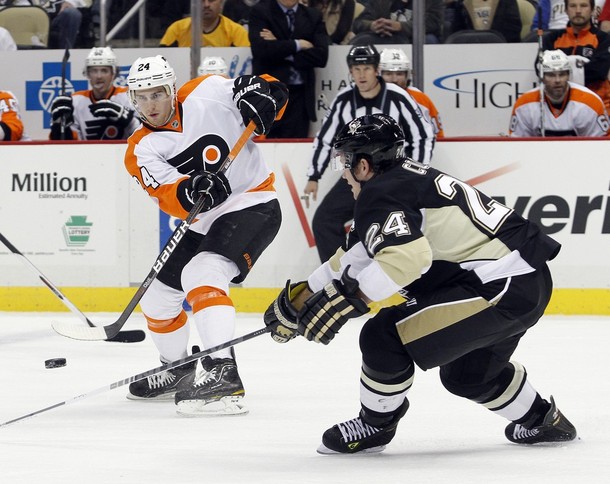 Shots have been fired. Lines have been crossed. Messages have been sent. Mud has been slung. The pot has been stirred. And all this was during the last few weeks of the regular season.

The commonwealth is about to be set on fire by an apocalyptic hockey battle as the Flyers will meet their cross-state blood rival Pittsburgh Penguins in a Eastern Conference quarterfinal clash that could be the best series we will see all playoff long. Game 1 is Wednesday evening at CONSOL Energy Center in Pittsburgh.

It’s a downright shame that two of the best teams during the second half of the season (Flyers 18-12-4/Pens 23-8-2 since the All-Star Beak) have to meet in the first round but that is another story for another day. This is the matchup and this is how it’s going to be. There’s nothing anyone can do about it but play hockey.

It’s unfathomable how evenly matched these two teams are:

So then, what are the keys for the Flyers to be successful in their quest to vanquish the Penguins?

First and foremost, the Flyers have to maintain the psychological vice grip they have had on the Pens this season. The Flyers went 4-1 against the Pens during the regular season. Yes, I said 4-1. I know they met six times but crumble that regular season finale into a ball and throw it away. It was basically an exhibition because it meant absolutely nothing. That 4-1 marker includes a 2-0 record in Pittsburgh. They can deny it all they want, but that fact is in the back of the Penguins’ minds.

The two teams HATE each other. Hate is a strong word but I feel that it is apt in this situation. So, it works to Philadelphia’s advantage that Pittsburgh is an easily rattled team, as we saw in the penultimate regular season meeting where the Flyers’ physicality and unwillingness to back down shook the Pens. If that happens again, it will be the Flyers dictating the game again.

Quick starts and not falling behind early are necessities for the Flyers. This team has had an incomprehensible issue recently when it comes to falling behind at the start of games, and not just afternoon games. They may have worked around it in the regular season but the Stanley Cup Playoffs are a whole different animal. If the Pens get that quick early goal, they will be relentless. They will be out for blood. Facing a team as talented as the Penguins, early holes will spell doom for the Flyers.

Philadelphia needs to limit Pittsburgh’s secondary scoring. The Crosbys, Malkins, Neals and Staals of the world will inevitably get theirs. But what the Flyers need to do is not let guys like Pascal Dupuis, Chris Kunitz, Steve Sullivan, etc. hurt them. Dupuis has been especially hot as of late, ending the season with a 17 game point streak.

Conversely, the Flyers have to continue to use their scoring depth to their advantage. The Flyers had eight players with more than 15 goals in the regular season. Claude Giroux, Scott Hartnell, Jaromir Jagr and, even though he’s had a down year, Danny Briere, aka Mr. Playoffs (96 points in 97 career playoff games), will all be targets of the Penguins defense. Matt Read, Jake Voracek, Max Talbot, Wayne Simmonds and the rest of the crew will have to continue to produce for the Flyers to have a chance in the series. Speaking of Mr. Simmonds, he could be a huge factor in this series, as he seems to thrive in the gritty, physically heated environment this matchup will most certainly produce.

Second periods could be an important aspect throughout the series. The second period is the period of the long change, which has the potential to disrupt line changes and keep players on the ice for extended periods of time. The Flyers need to get the puck in deep for line changes and eliminate the cute plays in the neutral zone. With as skilled as the Penguins are, they will be licking their chops if tired defenders are on the ice.  Long changes also come into play in overtime in the playoffs as the teams switch ends after every period.

Goaltending. The elephant in the room. Let’s be honest, if you didn’t see this one coming, well, you just haven’t been paying attention for about the last two decades. Ilya Bryzgalov needs to be the Bryz of March and not the Bryz of the middle of the season that was “lost in the woods.” The Flyers are so deep offensively and defensively that he doesn’t need to be the best player on the ice. He just needs to be stable and make the stops he should make. Bryzgalov has struggled in the past two playoff seasons with Phoenix, compiling a 3.44 goals against average in a 2010 seven game defeat to Detroit and an ugly 4.36 goals against average in a 2011 sweep at the hands of that same Detroit team. If he thought the regular season in Philadelphia was a pressure cooker, he hasn’t seen anything yet. But stability is all the Flyers need in net. That being said, Marc-Andre Fleury wasn’t so hot down the stretch.

Now for the moment you’ve all been waiting for: prediction time. Sorry to disappoint but this series is so close and evenly matched that there is no way a prediction can be made. Make fun all you want for taking the easy way out, but it’s the truth.

There are two certainties though. 1. The Flyers must at least split the first two games in Pittsburgh to have a legitimate shot at winning the series. 2. Whichever team survives this series may not recover enough from the ferocious battle to make a deep run at Lord Stanley’s cup.

Other series predictions: New York Rangers over Ottawa in 6 games/ Boston over Washington in 7 games/ New Jersey over Florida in 5 games/ Vancouver over Los Angeles in 6 games/ St. Louis over San Jose in 6 games/ Phoenix over Chicago in 6 games/ Detroit over Nashville in 7 games.