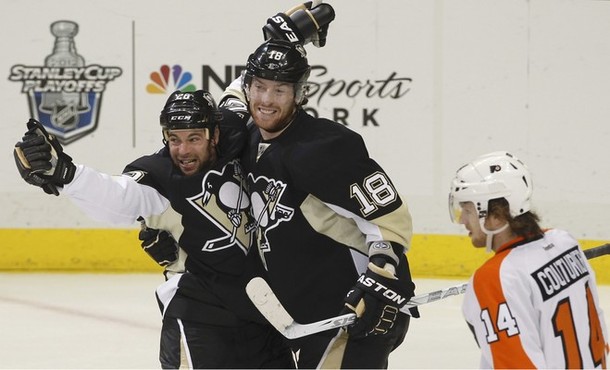 The Flyers returned to Pittsburgh for Game Five of the Stanley Cup Quarterfinals after failing to take Game Four seriously. Their efforts in Game Five showed vast improvement, but their team defense failed on two key moments that ultimately cost them the game.

Shutdown defenseman Nicklas Grossmann was out of the line-up due to a concussion caused by a dirty elbow from Evgeni Malkin behind the play. Malkin continued to take shots at the Flyers throughout the game, earning penalties for a handful but escaping with a few questionable hits as well. It got to the point where every broadcaster except Pierre McGuire was suggesting he’s headed for a suspension if he keeps it up.

James van Riemsdyk made his playoff debut in place of Zac Rinaldo, but was limited to 7:31 of ice time. JVR did not participate in the morning skate and was a game-time decision, but he was much less of a liability on the ice than Rinaldo. His conditioning will take some time to improve following seven weeks away from the rink.

Some might argue that Pittsburgh goaltender Marc-Andre Fleury has “stepped up his game,” but the defense for the Penguins stepped up their efforts considerably as well from previous performances, having blocked 18 shots and forcing 14 wide compared to the 18 shots total prevented by the Flyers.

Coach Peter Laviolette double-shifted Matt Carle and Braydon Coburn, who each skated more than 29 minutes of the game. Andreas Lilja and Erik Gustafsson played 7:09 and 11:51, respectively. For as much vitriol as there is for Carle in this city, he performed very well with the ice time given and scored one of the two Flyers’ goals.

Of the three Pittsburgh goals scored against, goaltender Ilya Bryzgalov was left somewhat out to dry on the latter two. The second goal began as a long outlet pass from Kris Letang, with Pavel Kubina as the only defenseman at the blue line for an odd-man rush. Had Bryzgalov challenged the shooter and kept his glove up, he may have had a chance, but Jordan Staal buried it instead.

On the third goal, Wayne Simmonds skated into the defensive zone after a lengthy shift and didn’t appear to have enough energy to cover Tyler Kennedy on a rush. He ended up handcuffing Bryzgalov with a screen in front.

The Flyers dominated in the third period, but by that point the officials were comfortable enough with the physicality of play that they decided to let each team play in lieu of calling every penalty. Pittsburgh managed to sneak away with numerous infractions, but the officials can’t be blamed for the Flyers’ failure to score at even strength.

Game Six returns to Philadelphia for a 1:00 p.m. puck drop. The Flyers have just two more chances to clear the first round; the sooner they make it out, the less likely they will lose more players to Pittsburgh thuggery.

Report: Broncos Trying To Workout A Deal For Asante Samuel

The loss had nothing to do with Grossman being out, or the defensive play. They lost this game from the drop of the puck. They didn’t play this game to win, they played this entire game not to lose. They laid back the entire game, & looked as though Pittsburgh was on a nonstop PP. After they scored their 1st goal, they simply stopped playing. They got absolutely nothing on even ice & it is killing us. Again with 2 $#!T goals given up by Bryz. Nothing he could do on the tic-tac-toe. I hate to say it, but if they lose game 6, they lose this series.

Penquins were clearly the better Team for most of tehe Game..
In the last 1:30, Giroux wins a coupls of face-offs and draws the puck back to the point , and then the player doesn’t shoot the but descides to pass it off….. He passed it off both times, WTF.. Put the puck on Net and see what happens… I think this team has shot it’s wad already and is done for..

Pens were the better team in the second period. Fleury was the better goalie in the 2nd and 3rd. Philly adjust their internal clocks for tomorrow and some how finally closes it out with a bruised and battered shady defense. Go flyers. Bryzgalov has to shine, maybe they can put up a couple march calanders up around the dressing room.