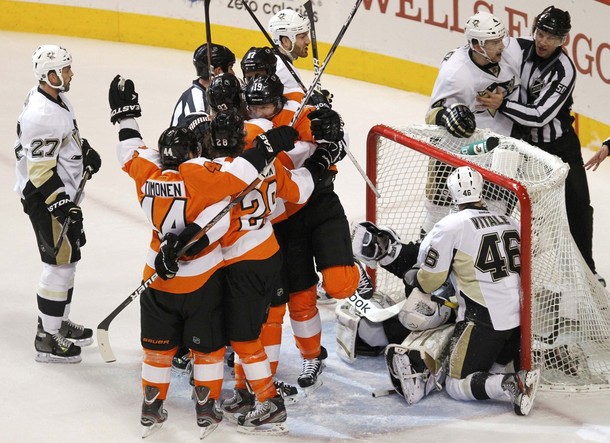 A loss in Game Six of the Stanley Cup Quarterfinals would not have been the last chance for the Philadelphia Flyers to advance to the next round, but it would have been an uphill climb against a talented Pittsburgh Penguins club if they allowed them to tie the series.

Implementing team defense for the first time this series, the Flyers gave a complete sixty-minute effort on their way to a decisive 5-1 victory against their cross-state rivals.

Claude Giroux set the tone of the game early by standing up Sidney Crosby within five seconds of puck drop and scoring 27 seconds later. While Giroux’s line with Jaromir Jagr and Scott Hartnell caused all sorts of havoc for the Penguins’ defense during the game, it was Giroux who finished the game with an unbelievable 24:48 of ice time and the series with a record fourteen points in six games.

Hartnell scored on the powerplay to widen the lead early in the first, sliding into the crease as the puck floated loose between goaltender Marc-Andre Fleury’s pads. The Penguins would finish the game with two more powerplays than Philadelphia, but the officiating was top notch following some questionable non-calls earlier in the series.

The turning point of the game was rookie defenseman Erik Gustafsson scoring a wrister from just above the blue-line at the 5:25 mark of the second period. What should have been a routine stop for Fleury sailed right past him along with the Penguins’ resolve. Gustafsson finished 3rd in ice time among Flyers defensemen, as Matt Carle and Braydon Coburn ate up significant minutes for the second straight game.

Evgeni Malkin put the Penguins on the board with a powerplay goal in the second period. Matt Read and Andreas Lilja gave the Hart Trophy winner too much ice to work with and he beat Ilya Bryzgalov cleanly.

The nail in the coffin came just 34 seconds later, as Danny Briere took a sharp angle shot on Fleury that, once again, sat loose between his pads. Penguins defenseman Brooks Orpik attempted to fish it out, but inadvertently pushed it in.

Not wanting to sit on a three goal lead (which would be unheard of in any other series), coach Peter Laviolette relied heavily on his best defensive forwards. Sean Couturier, Eric Wellwood, Max Talbot and Jake Voracek were each double shifted through the second half of the game while Matt Read, James van Riemsdyk, and Wayne Simmonds saw their ice time reduced.

James Neal scored on a late powerplay in the third period, but the officials waved it off on the grounds that Neal pushed Bryzgalov in the net while the puck was in his glove. Brayden Schenn scored the empty net goal to end the game for good.

As solid as Bryzgalov was in net, a lot of credit has to go to the team in front for limiting the scoring chances. The Flyers blocked 40 shots (!) against Pittsburgh compared to their 14 blocked shots. Including blocked and miss shots, the Penguins ultimately attempted 88 shots compared to the Flyers’ 47.

The time off this week should help give some much needed rest to the players without taking them away from the rink for too long. The team, having put together such a complete, all-around game today has given them a template to build off of in the next round.

A few more series need to wrap up before the next opponent will be decided, but for now, the Flyers own bragging rights against the Penguins until the next time they meet in the play-offs.

UPDATE:  Natalia Bragilevskaya, reporter for Sovetsky Sport (who usually translates for Sergei Bobrovsky during interviews), quoted Evgeni Malkin on twitter: “Philadelphia and St. Louis will meet in the Finals.” Hell of an endorsement from Malkin, no?