By the Numbers: Flyers Defense in Round One 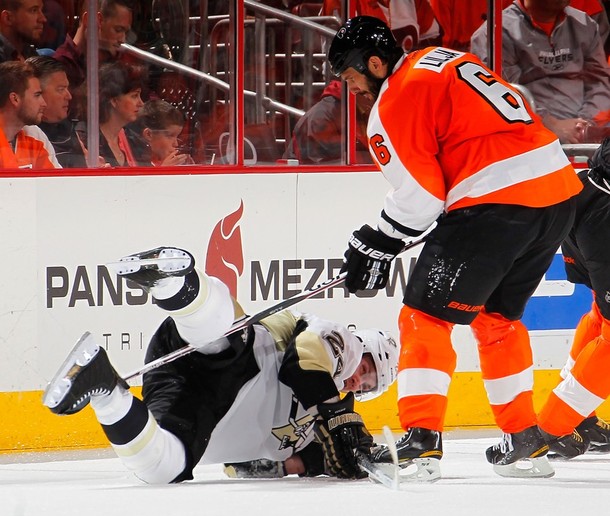 Game Six of the Stanley Cup Quarterfinals featured one of the best defensive performances from the 2011-12 Philadelphia Flyers.

This followed five games in which the team allowed three or more goals per game and ranked 15th of 16 teams in goals-per-game (guess which team ranked 16th?)

In order to continue to have success in the 2012 NHL playoffs, the Flyers are going to have to recreate Sunday’s efforts on a game-to-game basis. Just how well did the defense perform and what can we expect moving forward (keeping in mind the first round isn’t over for everyone else)?

Once a few more series wrap up and the Flyers’ next opponents become finalized, I will take a “by the numbers” look at their teams as well.

Brian Dawkins Annouces His Retirement From The NFL

Nice article as usual Josh. I really dont think people are understanding what the flyers have accomplished so far in the first round. They beat Pitt. Not just won the series, BEAT them. Bryz was under extreme pressure to win his first playoff series. Rookies galore too. The difference in the series was Bryz and the power play. Bryz made more game momentum changing saves then “the flower”. The flower wilted in this match up. Take out game 4 where everyone pooped the bed(all the players and coaches as well) Bryz held Pitt to almost 3 goals a game. That in it’s self is a good job. The defense(with the help of a certain 19 future selke winner) shut down the top 2 super stars on the same team. Our defense in not awesome, but it is reliable. just as is our goalie. Our offense and specialty teams with take us where we need to go; the cup. Keep it simple, dumb and chase. Not too fancy(see game 4).

Good article JJ, but stats aside, besides that last game, our DF played bad all around DF, & gave the puck up too much, with bad decision making & gave up way too many goals. Yes Bryz has a big hand in it also, but they were giving up way too many cross ice, cross crease passes & secondary goals off of rebounds. They better do better if they want to advance, past the next round. But the rest of the teams, aren’t as offensively explosive as the Pen’s. But if we get the Rangers, or Bruins, I think we have a problem. Hopefully we don’t have to worry about that after the next two days.