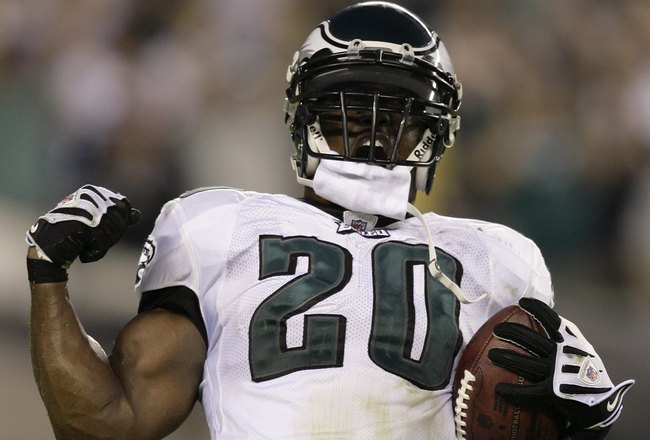 With the news that Brian Dawkins has made his retirement from the NFL official after a brilliant 16-year career, we can reflect on his fierce playing stlye and game-changing abilities at the safety position. Too often we tend to hyperbolize the greatness of certain players, but the respect and adoration that Dawkins commands is warranted.

He finishes his career as a nine-time Pro Bowler, a six-time All-Pro, and a member of the NFL 2000s All-Decade Team. He compiled 778 total tackles, 26 sacks, and 37 interceptions. He was the face of Philadelphia’s defense during arguably the most successful era in the franchise history despite the absence of a Super Bowl title.  Undoubtedly, he is among some of the best safeties to ever play the game and will be extensively honored and praised in the coming months and years.

But his retirment begs the question–does Dawkins belong in the Pro Football Hall of Fame?

The answer to that question probably depends on your perspective. Dawkins could cover like a corner and could hit like a linebacker. He allowed defensive coordinator Jim Johnson to do things with his defense that other defensive coordinators could only dream of. He played the game with a tenacious passion on his way to becoming one of the most recognizable players in professional football. Certainly, Dawkins is one of the most beloved athletes in the history of Philadelphia sports.

But Dawkins is hardly a slam-dunk for Canton. There are only seven pure safeties currently in the Pro Football Hall of Fame–six of those safeties played during the 1960s. The last inductee was former 49ers great Ronnie Lott. Lott was inducted in 2000 and probably serves as the best point of comparison for this exercise.

Frankly, Lott was the superior player. He was ranked as the 11th best player of all-time by NFL.com editors. A first-round pick out of USC in 1981, he was a 10-time Pro Bowl selection, an eight-time All-Pro selection, and a four-time Super Bowl Champion. He was a member of the NFL 1980s and 1990s All-Decade Teams. He only recorded 8.5 sacks during his 14-year career, but tallied an astounding 63 interceptions during that span.

When compared with Dawkins, Lott grades out as the better player, but that doesn’t necessarily preclude the former Clemson Tiger from reaching Canton. Many will have an eye on what the voters do with Dawkins when he becomes eligible given that both he, Baltimore Ravens safety Ed Reed, and Pittsburgh Steelers safety Troy Polamalu are the three modern players at the position who have the best chance of gaining entrance into the Pro Football Hall of Fame.

Making matters more difficult for Dawkins, and I know Eagles fans don’t want to hear this, but he was not the best player at the position during his era. While great, Dawkins’ numbers simply don’t compare with those of Reed. The 2002 first-round pick out of Miami is an eight-time Pro Bowler and eight-time All-Pro, and a member of the NFL 2000s All-Decade Team. Additionally, and perhaps most impressive, is that Reed is a three-time single season leader in interceptions–a simply astounding achievement. Reed only has a surprisingly low six career sacks, but his 57 career interceptions and six career touchdowns give him a significant edge in production.

Meanwhile, Polamalu may be more celebrated than Dawkins because of his two Super Bowl victories, but his numbers aren’t far superior to those of Dawkins–at least not yet. Polamalu is a seven-time Pro Bowler, five-time All-Pro and was also named to the NFL 2000s All-Decade Team. He has registered nine sacks and 29 interceptions throughout his nine-year career. One would have to assume that he has at least another three to four seasons of elite football left, and if he continues at his current pace he will easily surpass Dawkins’ numbers.

Again, the one factor which may vault Polamalu above both Reed and Dawkins is his key role in two Super Bowl titles.  The Steelers safety made big plays in two AFC title games to seal trips to the Super Bowl for the Pittsburgh squad.  Neither Dawkins nor Reed has a Super Bowl title on their resume.  Were the Eagles to have won a Super Bowl, Dawkins would be a easy selection.  The same is true of Reed, but his interception numbers will likely get him in the Hall.

Time will tell, but it may be a stretch to call him a definite Hall of Famer because given the voters’ historical reluctance to admit safeties and the performance of his two contemporaries.

By the Numbers: Flyers Defense in Round One

Hall of Fame voters are human beings prone to be influences about superbowl production.

In the end, that is the ultimate accomplishment. The reason for playing. To win the Superbowl.

That is why Andy Reid has failed as a coach. In the end. You are hired to win the Superbowl. Any other accomplishment is 2nd to winning a championship.

As great as Dawkins was, the Eagles defense never showed up in NFC championship games. Especially in the turnover department. It’s just a fact.

Still Dawkins was a playmaker. With forced fumbles and ints. A great tackler and great leader.

He should be in the Hall of Fame.

But then again, so should Bill Parcels and Ray Guy…

NFL Hall of Fame voters don’t always get it right.

Troy Palamola is very overrated in my opinion
He does make a lot of big plays but he also gives up a lot of big plays and if it wasn’t for Safety Ryan Clark to cover his ass, he would be even more exposed that he already is.. The last 3 Seasons for Palamola, have been very average at best and he is not the same players he was his first few seasons in the NFL..

Good point Paul…i love his game and he’s a great team guy. But I’ll take some of the young guns in the league over Troy at this stage in his career. Health issues and he does have Clarke to help his mistakes.

5 reasons Dawk is a HOF’er
1. Inspiration leadership and desire(no philly player had it like Dawk,and look what he did in the short time in Denver)
2.Tackling..his career #’s are outstanding…he squared up and always laid the hit to set the tone…players looked for him after they saw where Trott was lined up.
3.Coverage…always good at baiting the long ball(ask Favre) and loved to mix it up with the tight ends…great ball hawk for years.37 picks in how many seasons?
4. Versatility…did everythign from strip,tackle,cover,straff,batdowns,and great pursuit angles.Reed did somethings well…but im good friends with a Balty fan who has watched his whole career….he doesnt tackle well…never has.Dawk was all around better player then him and Troy.
5.Durability….Dawk missed some time but i can always remember him in the line-up…just a stud….go get the chisel and start his bust now.

BSM – I think Parcells is eligible this year? I could be wrong but I thought that was one of his issues with deciding on the saints job? – and agree on Ray Guy..
Nice right up and summary though

I think the big issue is – and just a general trend – you can look at the list of players brought in each year – there seems to be a flow of moving through the positions.. Lynch is going to be the first S looked at – then Dawk and right behind him Reed and Palo.. 4 really good safeties all in roughly (within 5 years) the same timeframe. I fear it could come down to the selectors having a debate as to which ones were just great and which ones were ‘HOF’ great.

Erock – I agree with everything you said about Dawk above – but the folks in Tampa are going to say pretty much the same thing about Lynch – course you are right and they are screwed up but.. you get the point.

Anyone hear if he is retiring as an eagle?

Parcells was eligible for the HOF this year, but did not get enough Votes to make it in..(and this was before the chatter of the possibly being the Saints interim) I am sure he will be elected within the next 2 years though and deserves to make it in as a HOF Coach
.