Leadership by Committee and How Prongers Injury Shaped the 2012 Flyers 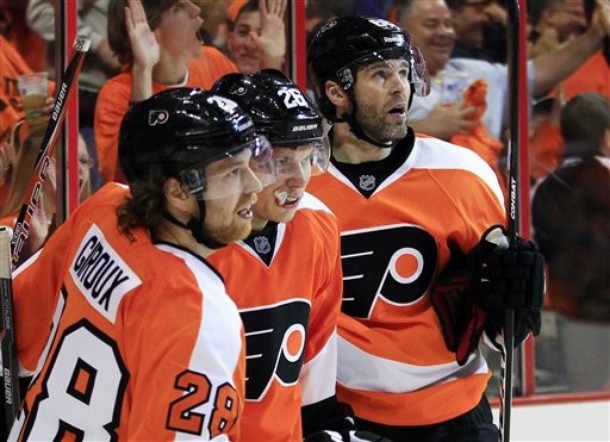 There is a word that often gets thrown around blindly when discussing leadership, whether you’re talking about a sports team, a club organization, or a company.

It is often misunderstood and misused by upper management types, but the general concept is that groups attain more success when the individuals involved believe that their efforts will make a positive difference towards the success of the group. If an individual in an organization feels as if his or her contributions don’t have any relevance to the success of the group, the organization suffers.

In hockey, and especially in Philadelphia, much weight is placed upon the title of “Captain.” As much of an honor as it is for the individual who wears the “C,” the fans (and by association, the media) often seem to care more than the players themselves about who wears it.

When Chris Pronger was named captain last September, I remarked, ”Pronger has not been shy of calling out teammates; the media caught him dishing out Claude Giroux last season just as the locker room doors were opening for reporters. It doesn’t matter if you’re the future star of the franchise or not- if you made noticeable mistakes that need correcting, you will be made swiftly aware.”

Ever since he took a high stick from Mikhail Grabovski to the eye in October, though, Pronger has had minimal contact with the team.

As a result, the Flyers have had to rely on leadership by committee as opposed to having one singular voice in the locker room to focus their efforts. It’s impossible to say which approach would have been better for them as a group, but they’ve excelled as a team even without their (arguably) best defenseman.

The key to ownership that often gets glossed over is that the individuals in a group have to feel like they’re working with others, as opposed to for others. It doesn’t matter if there is a hierarchy of responsibility or if one individual is paid more money than another; everyone has to feel like they provide equal contributions.

In the absence of #20, the trio of Claude Giroux, Danny Briere, and Kimmo Timonen have all worn the “A” patch as alternate captains. When some of them were hurt, the organization gave veterans like Jaromir Jagr, Max Talbot and Scott Hartnell the “A” as well.

In other words, every veteran was entrusted with the responsibility to lead the team by example on the ice at one point or another. Each player had a voice and didn’t have to worry about whether their opinion was in line with their captain’s.

Younger “veterans” like Giroux also had to learn what it took to motivate both himself and his teammates as the season progressed, instead of having to rely on others.

At the other end of the age spectrum, the team has iced around five or six rookies per game for the bulk of the season.  One might expect these players to falter under the pressure of playing in the NHL, but with coach Peter Laviolette providing them with ample opportunities and responsibilities, they have been able to buy completely into the team and his systems.

How many 25 year-old rookies get regular ice time at even strength, on the penalty kill, and on the power play in every game?

How many 19 year-old rookies are tasked with shutting down the top players in the league?

How many 23 year-old rookie defensemen are tasked with 17 minutes of ice time a night over Stanley Cup winning defensemen?

Each of these players understands that they are being presented an opportunity not just for themselves, but for the club as an entity. Sean Couturier doesn’t need to prove at this point he belongs in the NHL; he just needs to do the job he’s been given.

I wrote in late January that the Flyers should be wary of naming Claude Giroux their next captain after the drama that surrounded Mike Richards. Every fan and his mother-in-law appears to have prematurely named Giroux the next captain of the franchise as a result of his knocking Sidney Crosby on his butt in a pivotal playoff game.

John Boruk of CSNPhilly wrote this morning a gross statement that is the epitome of everything I wrote against: “Giroux is what most of us thought Richards would eventually become, and what  Snider was reminded of back in 2009 — the next Bobby Clarke.”

If you think Mike Richards wasn’t a good captain for this organization, you weren’t paying enough attention.

If you think Claude Giroux is “the next Bobby Clarke” just like Mike Richards was, congratulations! I hope you enjoyed the Kool-Aid.

If anything can be learned from this season, it’s that this team doesn’t need any one player to wear the “C” or have any more of a defined role than anyone else. The success of this team is founded on the principle of ownership; that every single player matters to the success of the whole.