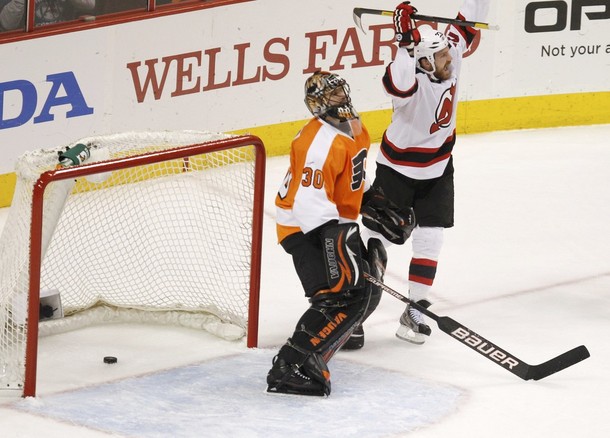 The Philadelphia Flyers, facing elimination against the New Jersey Devils, needed to find a way to respond to the Devils’ stifling defense and hold onto whatever lead they could muster if they had any hopes of forcing a Game Six.

After a final sixty minutes of play, they missed the mark, falling 3-1 to the Devils to end the 2011-12 NHL season.

Max Talbot gave the Flyers an early lead, forcing a bouncing puck in the crease past Martin Brodeur. As has been the case all postseason, the lead was short-lived. Bryce Salvador took a shot two minutes later that redirected past Ilya Bryzgalov off a Flyers’ stick and into the net.

There wasn’t much he could have done about that goal, but it was early enough in the game that the team could make up for it.

Then, at the 12:45 mark, Kimmo Timonen passed the puck back to Ilya Bryzgalov inexplicably while in the defensive zone. Instead of covering the puck as Devils forward David Clarkson skated on net, he attempted to play the puck past him. The puck bounced off of Clarkson’s leg, through Bryzgalov’s five hole, and into the history books.

Say what you will about Michael Leighton, but he never would have given up a goal like that.

The team never recovered, and only a handful of players really made an impression in the game.

Zac Rinaldo, back in the line-up while Claude Giroux served his one-game suspension, had six hits in his limited ice time and knocked defenseman Anton Volchenkov off his game (and off the ice, temporarily) early in the first period.

Eric Wellwood once again saw the least amount of ice time among any forward, and yet was the hardest working and most tenacious fore-checker for the team outside of Rinaldo. Wellwood was tremendous on the penalty kill, eating up minutes that would have previously been taken by Giroux. His finishing skills need work, but he is going to get a long look by the team this summer.

Matt Carle, while having worse results offensively than in any of the previous games, was much more defensively sound when the team needed him to be.

The rest of the team was hit and miss. Jaromir Jagr led the Flyers with 3 giveaways, while the team was culpable for 14 during the game. The powerplay was all over the map on their one opportunity against the Devils while the team themselves were caught in the box four times.

It’s not surprising that the Devils won this series. They finished the regular season on the Flyers’ heels in the standings, split the regular season-series, and never had any gaping holes in their line-up. They played a tremendous series and deserved to win.

If there is anything to be surprised about, it’s how easily the Flyers gave up. From Game One of the Semifinals, the team didn’t appear to buy in to the effort that was necessary to win and the coaching staff couldn’t adjust their game plan to address the Devils’ relentless fore-checking.

There are a lot of positives to take from this season, and the Flyers will remain in a good position as an organization to be competitive next season. For many of these players, this was their first experience in the postseason and there’s reason to think they’re only going to get better.

It’s going to take time for the bitterness of this defeat to dissolve, but it’s too soon to start dissecting what personnel changes should be made in the offseason. For now, let’s revel in the team defying expectations since October and sending the Pittsburgh Penguins home early.

Blanton Continues To Pitch At A High Level

The Bricklayers, I Mean The 76ers Lose To The Bulls