Sixers Must Make It A Full Court Game Against The Celtics 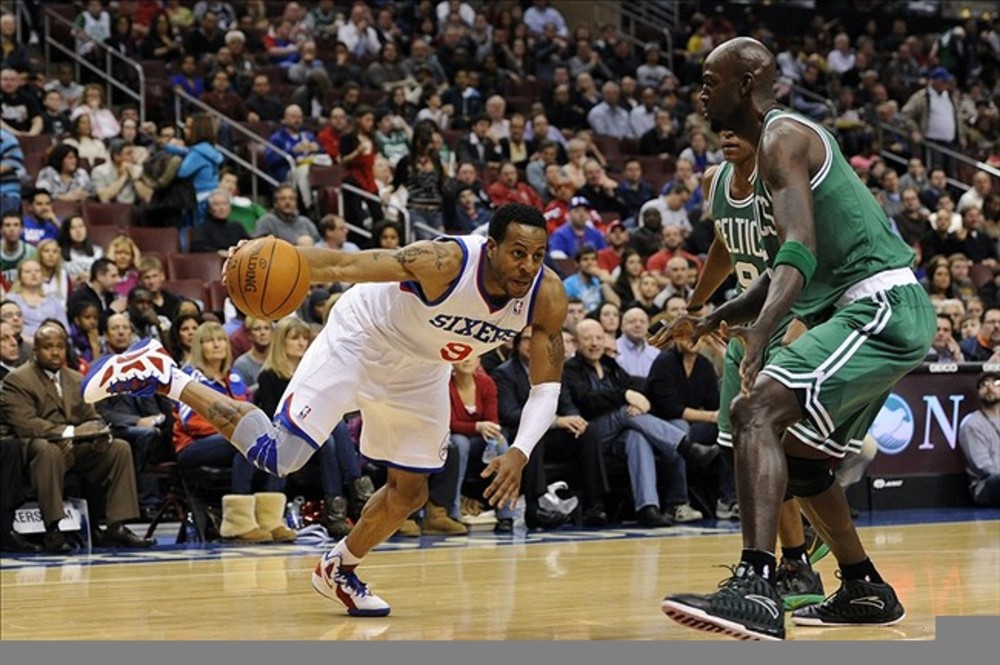 You might be a big 76ers fan, but don’t get it twisted, the Sixers aren’t as good as the Boston Celtics.  The Sixers don’t have one dominant offensive player, while the Celtics have a number of players who can take over a game.

Just like in the Chicago series, the Sixers are going to have to win ugly.  They’re going to have times during the games, when they look awful trying to put the ball in the hoop.  If it comes down to simply their shooting versus the Celtics shooting, Boston will win.  Grunt work will be needed by the Sixers to get the victory.

The biggest advantage the Sixers have against the Celtics is their youth.  They’ve got young, fresh legs.  Philadelphia also has the more athletic team and they could upset the Celtics if they force them to get out and run.  They can’t beat the Celtics in a half court game, they could beat them in a full court wide open running game.

They’ve got to force Celtics veterans Paul Pierce, Ray Allen, and Kevin Garnett into a wide open full court game by pushing the ball every time they get the chance.  I would like to see them utilize Jrue Holiday and Evan Turner together because they can push the basketball.  They must run every chance they get.

The key to doing that will be the 76ers defense.  They must make the Celtics work offensively and not give them easy shots.  Philly must contest every shot, then hit the boards much better than they did against the Bulls.

Good defense and quality rebounding are necessary if you want to run.

On the offensive side, they must execute their offense.  The Sixers need to look for every opportunity to work the ball inside  and take the ball to the hoop.

If they win it, it won’t be pretty because the Sixers don’t have the dazzling jump shooters and dominating offensive players.  They do have the athletes needed to get out and run.  They must find a way however they can to get the job done and I would encourage them to run.

Iguodala Nails The Free Throws As Sixers Eliminate The Bulls

Look love the sixers but unless Pierce and Garnett both blow out their knees we have no shot enough said.

My biggest worry going forward:
Philly’s biggest weakness is defending against a good PF/C pick & roll big man jump shot – unfortunately Boston has one of the best in the game in KG. The last game the 76ers played Boston, which the Celtics won (103-79), Kevin Garnett 8-11 for 20pts & Brandon Bass 8-10 for 18pts. How well Elton and Spencer defend that foul line extended jumper will determine how competitive the Sixers are this coming series.

we all hear and know the TNT & ESPN NBA Analysts are excited about a Heat/Celtic Eastern Conference final. The whistle will favor the Celtics.

Start Evan Turner and play an up tempo game.

Force Rondo to take shots outside and limit the fouls.

Regardless i think Boston in 6. Miami/San Antonio in the Final.

This was the worst matchup for the Celtics, they just dont matchup well with the sixers athletisism.. Iggy has a big game on defense and offense, turner and holiday ball out and the sixers win this game and series in 4-6 games. The Celts dont scare me at all. It will be Sixers vs Heat in Eastern Conference Finals, then we’ll go from there.. But they win this game in Boston tonight.. ShowYaLuv

This will go 6 or 7 Games.. The Celts are not going to roll over or be intimidated by the 76ers advantage athleticism wise.. I do believe that Iggy can neutralize Paul Pierce, but I am not sure they can contain Garnett well and the wild-cark is verteran 3-Pt Shooter Ray Allen who is on his last legs but can still shoot when he’s left open.. The key is the 76ers taking the ball to the Hoop and challenge the inside players of the Celts, both Holliday/Turner should be able to dribble penetrate versus the smaller Guards of Celts.. They offensivewly are the keys for the 76ers Success as well as Hawes staying hot and maybe drawing Garnett out wth him a bit to open some driving lanes for the other 76ers… Should be a close,competitive Sereis but 76ers need to capture game #1 and use their youth,athleticism and energy right from th eget go and have momentum…

it’s halftime 5 point lead, should be double digits but Thad Young’s enters game the lead crumbles — Celtic’s bigs missing outside shots, then Thad comes in & its layup central while thad misses layups on the othe end, Yound 0-3 and his man cuts off penatration to the basket for the guards. Thad Young is not a Power Forward and certainly not a playoff power forward

This is a team sixers can out run .. I also like Lavoy .. hes just smooth and productive and always in position but hes starting to walk like speights with hes knees closer together and wears knee braces now ..Thats not good..

What is Lou doing???

That was pathetic theyre not gonna win now..

Jon Hart
May 12, 2012 – 8:06 pm
This was the worst matchup for the Celtics, they just dont matchup well with the sixers athletisism.. Iggy has a big game on defense and offense, turner and holiday ball out and the sixers win this game and series in 4-6 games. The Celts dont scare me at all. It will be Sixers vs Heat in Eastern Conference Finals, then we’ll go from there.. But they win this game in Boston tonight.. ShowYaLuv
Your lack of knowledge, idiocy & imbecilic comments, never ceases to amaze me.
1 down, 3 to go, for the blowing up of this fraudulent team. Then they can properly rebuild towards legitimacy again. Hopefully next year will be a roster without Stinkadala, Brand & Hawes on it. This should have been a year in which you play & find out what all of the kids have in them, & to play all of them all of the time, to see them grow & gain chemistry. With the presence of Stinkadala & Brand, still being on the team, destroyed all of that. Now we still don’t know for sure what we have in Vuchovic, Turner, Thad & Jrue, playing together. A totally mismanaged offseason & trade deadline, just for a fraudulent, absurd, & a nearly impossible chance of winning a title. Plain & simple, it was a wasted season, that didn’t accomplish anything but, prolong the inevitable. Get bouced & the blowing up of the roster.

many blown opportunities over the entire game and the Celts had their legs more than the Sixers did in crunch time.. Back to back poor plays by Lou WIlliams sealed the deal.. Getting blocked by Rondo on the 2 on 2 fast break opportuntiy hurt, you have to go to the hole stronger than that Lou..
Then the next or following possesom Lou on another break dribbles from the Paint out to the 3 PT line and throws up a terrible shot and he had Hawes coming down the lane wide ass open than he missed.. Game was over right then… and then the 3rd poor play is Holliday has to miss that 2nd Foul shot on purpose to try to get rebound and tie the game.. the 76ers had a fould to give which means they would have had to foul the Celts Twice and have Celts miss a fould shot and go down the length of the Court to attempt to Tie in 3.5 Seconds, It wasn’t going to happen.. Poor play,shot selections and coaching all down the final 4 minutes of the game..