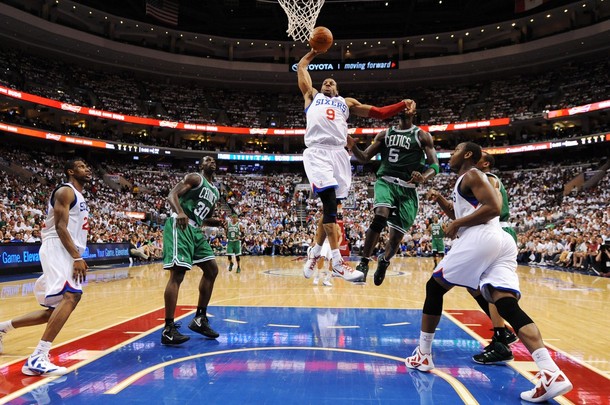 The 76ers’ season comes to an end after a Game 7 loss to the Boston Celtics. The Sixers were simply unable to overcome the wealth of talent that the Celtics have. The 76ers played a tight defensive game (and series), but showed deficiencies in guarding the pick and roll of the Celtics, and the likes of Rajon Rondo and Kevin Garnett.

However, the 76ers showed a ton of heart not allowing the Celtics to pull away until the final 1:30 of the fourth quarterm which was started with couple of very long (and frankly lucky) jump shots from Rondo. In the end the Sixers simply left too many points on the floor, (particularly at the foul line) and lacked what the Celtics had, someone to go to when they had to have a bucket.

The cliché that there were a lot of lessons learned and that this team has grown a lot through this playoff run is annoying to hear, but it certainly stands true with this Sixers team. This team is far ahead of the team that got rolled by the Heat in 5 games last year’s playoffs and even the 76ers team that finished the regular season this year.

What might be most exciting aspect of this series at least from a fan perspective is the restoration of the Sixers-Celtics rivalry. The Philadelphia fans around my age (23) haven’t experience this rivalry. Sure you have read about it, but have yet to have the chance to see it and what is because of the futility that the Celtics went through in the 90’s and early 2000’s and ditto for the Sixers in the 90’s.

The 76ers are a young team that is certainly blossoming and the status of the Big 3 in Boston could be no longer after this season but there should be some more classic playoff action from these two teams in the near future.