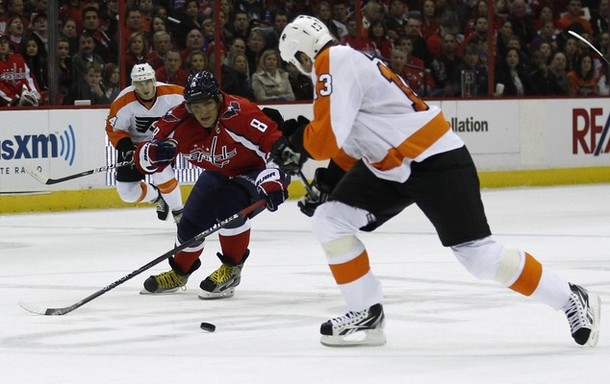 Elliotte Friedman publishes a weekly column titled “30 Thoughts” for CBCSports that encompasses a wide range of timely topics relevant to the NHL or the sport of hockey itself. In his most recent column, Friedman threw out this interesting (if not frustrating) item:

“In discussing the New Jersey forecheck about a week ago, [Zach] Parise gave some insight into what Philadelphia will be looking for. Parise said one of the reasons the Devils successfully pressured the Flyers was the lack of a right-shot defenseman to move the puck on that side. The only one on the roster is Pavel Kubina, who was a healthy scratch for the series. “

In hindsight, replacing rookie Erik Gustafsson with the 35-year old Czech blue-liner on the third line may have helped alleviate this issue, if it was in fact central to the Devils’ strategy.

Kubina was scratched, though, because the speed of the game had been impeding his effectiveness over the last stretch of the season.  The Devils’ relentless forecheck would have likely stalled his efforts anyway.

This topic does present a question for the Philadelphia Flyers, though- do they need to pick up a right-shooting defenseman in the off-season?

Most NHL players shoot left. There really is no definitive answer as to why, but it makes those players that shoot right a commodity for the flexibility they allow on the ice.

As Kubina is not expected to be re-signed by the organization, the Flyers would not have any right-shooting defenseman on the roster unless they went out of their way specifically to sign or trade for one. There are several options hitting free agency that could address the issue.

I’m not even considering Radek Martinek, whose joints appear to be held together with Elmer’s glue.

Beyond these players, there aren’t many right-shooting defensemen available with NHL experience. Impending collegiate free agent Justin Schultz would fit the bill, but the Philadelphia Flyers are likely one of thirty teams that will be vying for his services on July 1. As it stands, the Edmonton Oilers and the Toronto Maple Leafs are apparently the front runners (for reasons I couldn’t tell you).

Then there’s the crown jewel of all right-shooting defensemen- Shea Weber. I don’t think I need to go into any further detail, but he would obviously be the first option if available.

Can The Phillies Count On Polanco?

JJ, they need to rebuild this DF. If they can somehow manage to get Weber, Schultz & Schenn, I’d be ecstatic. The Flyers MUST eye replacements for Pronger & Timonen. Also, they need to let Carle walk. If Nashville resign Suter, which seems to be a good chance, we can possibly put together a deal for Weber. I know this is all pie in the sky, but I would do this-
1- Sign Schultz. *Very likely*
2- Trade JVR for Luke Schenn. *Very possible*
3- Trade Coburn/ Meszaros, rights to Carle, 2 1st rounders for Weber. *Who knows*
JJ, can an UFA be traded before FA? I’m not 100% sure. They need to do this. Just bringing back Carle, or making a lateral move, ain’t enough. With Timonen’s surgeries, age, & ware & tare, he can’t be counted on, so we need to bring in, at least 2 new upgrades, on the blueline. Although Bourdon, Gustaffson & Manning, are good young defensemen, they can’t be counted on right away, to be top 4 defensemen. We are still considered a rebuilding team, regardless of how we over-achieved this year. In the beginning of the year, if you would of had a poll of expectations, from the fans, 9 out of 10 would have said NO playoffs. I know my expectations were surpassed. Let’s hope Homer is very aggressive.