Can The Phillies Count On Polanco? 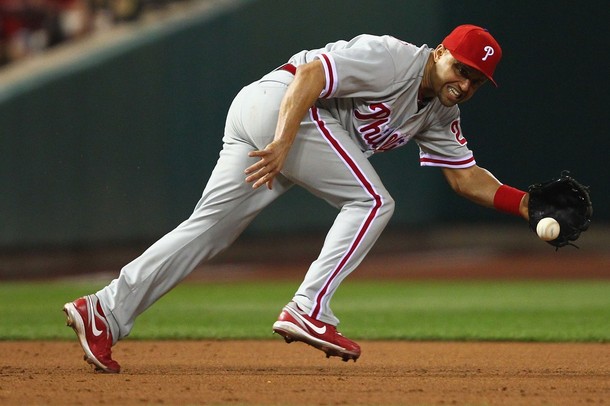 The 2012 season didn’t start out very well for Placido Polanco. The trusted infielder limped out of the month of April with a sub-par .250 average, which at one point was below .200 during the middle portion of the month. With questions of whether or not he could still be counted on in the lineup, the career .300 hitter strung together a very impressive (and much-needed) hitting display in May.

Becoming one of the team’s most reliable hitters once again, Polanco, who is second on the team behind Carlos Ruiz (among qualified players) in batting, will have to continue his sweet swing throughout the season to help alleviate the lack of power in the Phightins’ lineup.

There’s uncertainty around the timetable for return regarding Ryan Howard and Chase Utley, and even when they do come back there’s no way the Phillies can rely on them. With seemingly all of the Philly hitters beginning to find their swings again, having Polanco feeling confident in the batter’s box is definitely important for the Phillies.

But will he maintain this pace for the entire season, and can he remain healthy?

These are two questions that are rightfully attached to Polanco. When he is swinging a hot bat, the Phillies find themselves in a better place. The problem, though, is when injuries strike.

Judging from his career, Polly will more than likely manage a productive batting average and on-base percentage in 2012. However, the 14-year veteran has recently been vulnerable to injuries, something that Philadelphia fans do not want to see. During the Boston Red Sox series, Polanco dealt with a mild sprained ankle. Luckily, it was nothing too serious.

But that’s just it for the 36-year infielder. Whenever things start to go good, there’s always some kind of pull or strain that inflicts Polanco. With so many injuries striking this team, there’s no room for another key player to go down.

Whenever Polanco’s name comes up, there is always going to be a red flag surrounding the discussion. So take his strong month of May with a grain of salt, because with the way the injury bug has been imposing upon the Phillies (and throughout the MLB), there’s an unfortunate anticipation that at some point, Polanco could find himself on the shelf.

On a non-gloomy note, while things weren’t going well at the plate, which was quite often for Polanco in the opening month, there was never a doubt about his glove. Yet to make an error this season, the third baseman leads all players at his position in fielding percentage and is proving to be a heavy favorite for the gold glove at the end of the season. If Polanco and his aging joints can keep strong throughout the year, the Phils should receive a strong season at the plate and in the field from the two-time All-Star.

Babin Wants To Run With The Bulls

Don’t jinx the guy Kyle… He’s been playing well for the last few weeks and though he provides little power, he is a good RBI man in clutch situations, so let him be please… Moving forward, this will be final season as a Philly as he is in his final contract year, so let him stay healthy and enjoy it for the Phils need his glove and his contact in the line-up..

Definitely don’t want to jinx him. But with the way the injuries have been piling up, especially with Contreras out for the year now, it’s definitely important for Polly to keep healthy. He’s just got a bad history with injuries so it’s always a concern with him, though.

I hear you with Polanco’s recent injuries over the last few seasons, but the bottom line is this for the 2012 Phils, they have no choice but to rely on Polanco for they have no real alternatives if he does suffer a injury.. Polanco’s a tough guy and will play thru the nicks and bruises.. He has been outstanding in the Field this Season..

Paul, Quentin berry, the CF for the tigers is a former phillies prospect. Do you know when, who he was traded for? Tried to look it up with no luck..

i don’t know Frank22, I’ll do some digging around and let you know if I find out anything.. How long ago was he in Phils system..

Berry was not traded by the philadelphia orginization he was released in 2010 when he was with the reading phillies as i had saw him there that season.here is his bio from mlb.com for the 2010 season his last with reading.

Assigned to Double A Reading by the Philadelphia Phillies to begin the 2010 season…Sidelined April 12-30 with a viral infection…Tabbed the Eastern League Player of the Week for June 7-13 — batted .500 (8×16) with a double, home run, five RBI and four stolen bases in five games during the week…Claimed off waivers by San Diego from Philadelphia on July 14 — assigned to Double A San Antonio by the Padres.

He is from San diego I believe and was suprised when they waived him as he had just been player of the week in june but had started to struggle though.

that’s good knowledge there jbeeee, he didn’t hit much in the phils system but very good speed, a victorino type, right now h’e playing pretty well with the tigers, phils probably wish they still had him as we wait for dom brown to live up to his hype

jake, keep waiting for him. You’ll be an AARP member, before that happens.