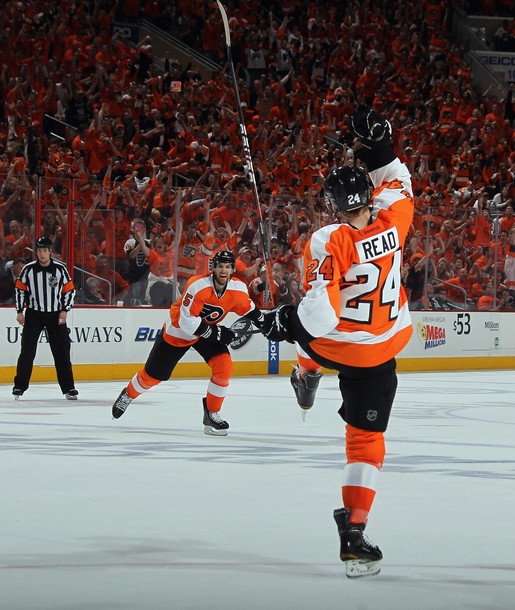 The fourth line in hockey is the least appreciated.

They’re often the plugs, the role players, the goons and the also-rans.

During the Stanley Cup Finals, though, the fourth line almost always joins the superstars at center stage.  The narrative surrounding the “lunch pail” players is too ripe for the picking to be ignored, especially if they’re successful on each team’s run to the Finals.

In 2011, the efforts of the Shawn Thornton/Gregory Campbell/Daniel Paille line for the Boston Bruins were considered the ignition that drove the franchise to its first Stanley Cup victory in 39 years (Editor’s note- thanks to Iggles for pointing this error out. Flyers have not won the Cup in 35 years…).

In 2012, New Jersey Devils head coach Peter Deboer credited the Bruins for exposing the lack of depth in their bottom six.

“I think our third and fourth lines have been exposed against these guys when we’ve played them… When you look at the stats, their fourth line has killed us the last few games we’ve played them… I think we knew that.  It’s been an issue all year.  We juggled guys around hoping to find a fit and hadn’t been able to. So Lou (Lamoriello) went out and acquired guys I think fit that role perfectly, so I don’t see that as an issue anymore.”

Fast forward to the Stanley Cup Finals and the fourth line of Stephen Gionta, Ryan Carter and Steve Bernier have transformed a middling unit into one of the most effective lines for the Devils.

In 109 combined regular season games, the trio were individually responsible for 5 goals and 14 points.

Looking ahead, the Philadelphia Flyers have one player who will be key to the success of their fourth line- Matt Read.

Read bounced around between all four lines in his rookie campaign, finishing with an impressive 24 goals and 47 points in 79 games played.

Both his production and defensive play would be enough to earn him a spot on the third line, but the Flyers have a surplus of young forwards in need of ice time.  Since Brayden Schenn and Sean Couturier may prove to be the future of the franchise (if they aren’t traded tomorrow), someone is going to have to slide down a line, and it may as well be Read.

Read has the versatility to play center or wing, depending on what line Max Talbot falls to next season, along with a cap-friendly hit of $900,000. As an undrafted forward on an entry level contract, his position on the team was built for the fourth line, but he has shown he is capable of being useful on other lines as the need arises (injuries, slumps, suspensions, etc.).

There is no evidence to suggest that either Read or Talbot will be able to recreate their production from the 2011-12 NHL season, but compared to the Kings and Devils, they are both better prepared to take on tougher competition than their fourth line counterparts.

Read, though, should be the anchor on which the Flyers’ fourth line is built. The organization will have to be creative in who his linemates are, as goons and enforcers add little to no value to the line-up in the post-season. The Devils realized that late this season when forwards Cam Janssen and Eric Boulton were dropped from the roster.

At the end of the day, Read is as important to the make-up of the club as Claude Giroux.

Like The Upcoming Season, The OTA’s Are About Michael Vick

Dominique Rodgers-Cromartie Has Hall Of Fame Talent, But…

No way he should be on the fourth line! He’s a top 9 forward, going forward. He’s not a fourth liner, with his offensive talent. I thought Laviolette had goofy line combo’s, but that’s nut’s JJ! LOL!!!

I agree with DCar on this one. This guy needs to be with other guys with offensive skill and you will see him continue to score in the 20s.

For God’s sake, he was in the running for rookie of the year, why would you waste that on a 4th line. He needs ice time, with offensive players. No brainer. Dropped the puck on this one, JJ. Hey, everybody, even you, is entitled to 1 bad article. LOL!

Somebody has to play on the fourth line. Between Giroux, Hartnell, Voracek, JVR, Simmonds, Briere, Schenn, Couturier, Talbot, and any potential free agents brought in, where does Read fit?

I think the idea that “wasting” talent on a fourth line just goes to show how little appreciated a good fourth line can be. It doesn’t *have* to consist of players like Jody Shelley or Zac Rinaldo.

At his salary, I still think Read be a worthwhile piece to build a solid fourth line around.

Talbot is a career 4th line, DF/ pest forward. He was only higher because of Lavy’s man love. Come on JJ, you know Hockey, & you know Talbot is not a top 9 forward. I also, read that we are negotiating, to bring back Jagr & Voracek. IMHO, Jagr is a mistake. That $$$ needs to go on the blueline. If the rumors are true, I think JVR, &/or Hartnell are goners in a trade for a blueliner.

I agree that Talbot should be on the fourth line, but he was useful on the third line in a “shutdown” role. History suggests he will probably regress back to being a 10-goal scorer, but there’s no history to know how Read will likely perform next season.

Hartnell was the best goal scorer for the club in 2011-12 and has a no trade clause in his contract. They will not trade him.

Anything can happen between now and October with this forward core, so a clear opening may present itself for Read to contribute on the second or third lines. Again, if you’re going to build a team that is legitimately contending to win a championship, cheap, talented players on a fourth line as strong as your third line will go a long way.

@JJ… slight correction: Prior to last season it was 39 years before that since B’s won the Cup in the ’71-’72 season.

As you alluded too, if you put Read on the 4th line, he in no way should be playing with the likes of Rinaldo/Sestito EVER! He needs some hard-checking big bodies with speed and/or passing skills to get him the puck. There is no room for goons/enforcers anymore on the limited gameday rosters, but guys who just can play tough and occasionally drop the gloves.

Read on the 4th line? Fail

How about a kids line: Read, Coots and Schenn. Let these guys develop together over the next couple of years.

I would move Voracek if they can. Wellwood could easily take his spot.

Or do you need Schenn/Coots to center 2 lines?

How about these lines (assuming Jagr doesn’t come back)

1) Hartnell-Giroux-Briere- I would like a dominant #1 line to maximize Giroux
2) JVR-Schenn-Simmonds- This line would be a killer (assuming JVR can stay healthy)
3) Wellwood (Voracek)-Coots-Read- Effin speed line which would run the other team ragged
4) Voracek (Wellwood)- Talbot- ?

bugsy, Voracek is a UFA, he doesn’t have to be moved. They will re-sign him, though, he’s too young & talented, not to. I like your kid line idea, for this year, but Schenn & Couturier are our future 2nd & 3rd line centers, respectably. We need to find a way to get rid of Briere’s albatross contract & no-trade clause, first. His & Bryzgalovs contracts are monumental mistakes.

Thanks for the info on Voracek, but I don’t see his talent translating into production. Maybe if he gets on a top line though…

I agree about Bryz, but no way you think about getting rid of Briere. He is way to productive in the playoffs, and I think if you stick him with Giroux on the top line, he will be productive again.

Agree about Schenn and Couturier as shown in my proposed lines above. T

bugsy, every opportunity Briere has been given, to play wing, he has failed miserably. He has been given icetime, at wing, with Richards, Carter, Giroux, & Schenn & has disappeared. Hell, he has disappeared, for most of his contract here. I give him props for his good playoff play, but he is getting paid elite $$$, & for what he gives us, is far from elite. He is small, is a defensive liability, is injury prone, doesn’t play physical & does a Copperfield, every year. So if there is the slightest bit, of a possibility, of getting him to waive his NTC, you have to do. Have you watched any of the Flyers games, since we got him? He is, by far, the WORST MOVE, of the Homer tenure. It’s too early, to fully judge Bryz, but if we can somehow trade him for Luongo’s equal, albatross, of a contract, or get lucky with an amnesty clause, from the new CBA, I’d ship his Russian @$$ out of here too!