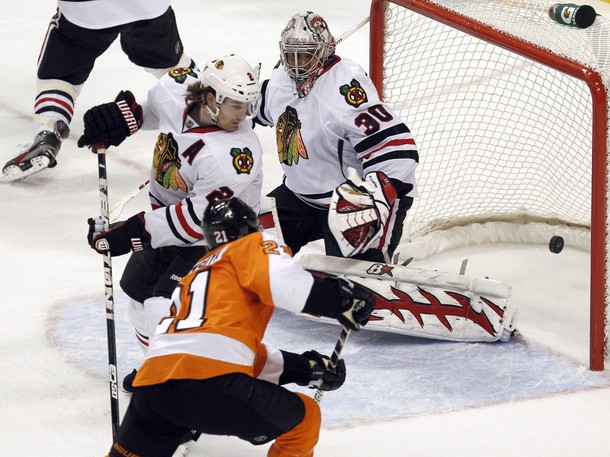 When it comes to rumors, this one is a doozy.

“To continue Flyers like Rick Nash and a ‘possible’ trade really can’t happen until JVR is 100 percent,” wrote Eskin via twitter.

The Flyers released a list of surgeries on May 19, which included the statement for van Riemsdyk, “Had surgery to repair torn stomach muscle. Recovery time is 4-6 weeks.”

So either the Flyers neglected to mention a second surgery necessary for the 23 year-old or what Eskin is reporting is missing important context. Eskin is also linking the purported trade to Nash, but there’s nothing substantiating that comment.

The fallout between Nash and Columbus Blue Jackers general manager Scott Howson has all but assured that #61 will be playing elsewhere in October, but it’s still a bit of a stretch to say it will be in Philadelphia. With forward Marian Gaborik out for the next six months, the New York Rangers are considered the front runner for any Nash trade at this point.

Van Riemsdyk signed a six-year, $25.5 million contract last August. Much like his former teammates Mike Richards and Jeff Carter, it’s not unreasonable to think he’d be annoyed if the organization would consider trading him so quickly after investing in him as a franchise player. Still, it would be shocking and out of character if he were to go as far as Eskin is suggesting with trying to prevent a trade.

The most likely situation is that a Flyers executive is annoyed that a trade can’t happen until JVR has surgery and someone (be it Eskin or his source) is spinning it such that JVR is the “bad guy” if and when he is eventually shown the door.

UPDATE: Sarah Baicker of CSNPhilly reported via twitter, “Paul Holmgren says JVR’s surgery is delayed b/c of an infection in JVR’s foot. All other speculation is ‘way off base,’ Holmgren says.”

Dave Isaac has also written a post with quotes from van Riemsdyk denying the allegations.

The same thing happened last year. We had him traded for Schenn, & his concussion put a kibosh on that trade. If he is, delaying his surgery, he is a soft, Lil, punk. Who do these spoiled athletes think they are? Be glad you are being OVERPAID, to play a kids sport. For what Tim Thomas has pulled, he should be blackballed from the NHL. Now he’s giving other players ideas. It’s bad enough that these Russian pukes, hold up their organizations with the threat of the KHL, now this garbage. I don’t think Eskin would make something like that up. He may be an @$$hole, but he works very hard at what he does, has many legit sources, & has been very accurate, with his predictions in the past. As I said, if JVR is doing that, he should be fined, or something. Sickening!