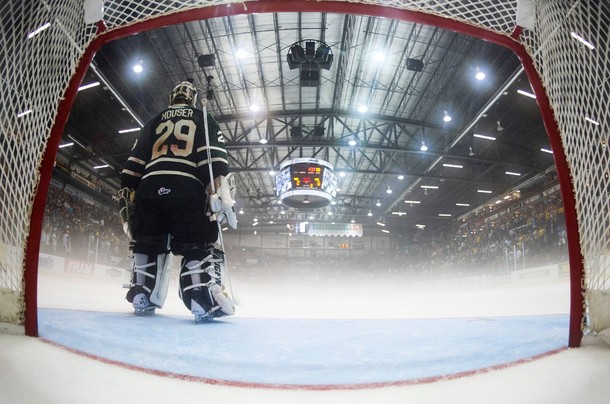 The 2011-12 Los Angeles Kings ended their post-season pursuit of the Stanley Cup with a striking 16-4 record.  It is the second best record in the post-expansion era of the NHL (tied with the 1997 Detroit Red Wings), behind only the 1988 Edmonton Oilers, who finished 16-2.

The Kings dominated their opponents in each series, outscoring them by a total 57-30 margin once the final buzzer sounded on Monday night.

They were not always a dominant team, though. Like anything in life that experiences growth, their success began with a single seed: Jonathan Quick.

There’s no player more important to the franchise at this moment than the 26 year-old netminder.  As Kevin Allen of USAToday so eloquently put it, “Conn Smythe Trophy winner Jonathan Quick posted a 1.41 goals-against average and .946 save percentage. To put his save percentage into perspective, consider that, in theory, a team would need to get nearly 40 shots on goal to expect to score two goals against Quick… If Quick saw the puck, he stopped the puck.”

Quick was drafted in the third round by the Kings in 2005. NHL Central Scouting ranked him 9th among all North American goaltenders, behind current household names like Tyler Plante, Alexandre Vincent, Daren Machesney, and Taylor Dakers.

He completed two seasons at the University of Massachusetts-Amherst, split one between the AHL and ECHL, and then spent the next four seasons battling in Los Angeles.

Drafting a goaltender and sticking with him? What a novel concept.

The Kings were a shadow of Monday’s juggernaut during Quick’s rookie season, finishing in 26th place.  They made it to the post-season in each of the next two seasons, only to be bounced in the first round.

Instead of panicking, though, Kings general manager Dean Lombardi knew that Quick was a franchise goaltender. His numbers didn’t lie.  Seven years after selecting his rights without any pomp and circumstance at the Westin Hotel in Ottawa, Quick has proven to be the most valuable player in Los Angeles.

The Philadelphia Flyers, meanwhile, haven’t drafted a goalie in years that they’ve stuck by. Either they don’t bother signing the goalies they draft or they give up on them after one season in the AHL.

Lord knows they’ve tried to find a winner through the draft.  Jeremy Duchesne, ranked two spots lower than Quick in 2005, was selected by the Flyers in the 4th round.  He is currently playing in a semi-professional Canadian league.

Then there’s Jacob De Serres, ranked 6th in 2008 and taken in the 3rd round.  After seven seasons in the Canadian junior leagues, he is currently attending college in Calgary.

The one lustrous stone amidst the rubble – Sergei Bobrovsky – is expected to be shown the door shortly to make space for a more seasoned back-up.

Confirming the team’s worst kept secret, James Mirtle of the Globe and Mail wrote on twitter recently, “Was told Flyers offered Bobrovsky around the league. Not a huge surprise – they want a better safety net behind Bryzgalov.”

Nobody can predict the future, but the Kings built their team from the ground up and with patience.  Ilya Bryzgalov, in his first year in Philadelphia, was not the missing piece of the puzzle.

If he was to be the last missing piece of the puzzle, then he came from the wrong box.

The window for success has not closed, but drafting a true starting goaltender in 2012 is essential to ending their Stanley Cup drought in the next few years.

Malcolm Subban (younger brother to everybody’s favorite defenseman, P.K.) is a safe option if he’s still available in the first round by the time general manager Paul Holmgren is called to the podium in Pittsburgh. Swedish goaltender Oscar Dansk is also considered one of the best goaltending prospects in the 2012 NHL Entry Draft.

If they want to corner the market on Russian goaltenders, there’s always Andrei Vasilevski.

The Flyers also hold the 78th overall pick. Goaltenders like Michael Houser or Anthony Stolarz, if available, would be decent pick-ups in the 3rd round as well.

The point is that it’s time to take the position seriously again beyond rolling the dice with skilled journeymen or giving carte blanche to veteran free agents. They’ve done it before with the likes of Brian Boucher, Roman Cechmanek and Antero Niittymaki, who were each drafted by the organization and given a chance to develop (with varying degrees of success).

It doesn’t matter if it takes seven years. It’s already been 37 years and counting since the last parade.

For anybody’s who curious… Bobrovsky was ranked as the 5th best European goaltender in 2008 (just saying).

Notes From Phillies’ 9-8 Win Over Minnesota