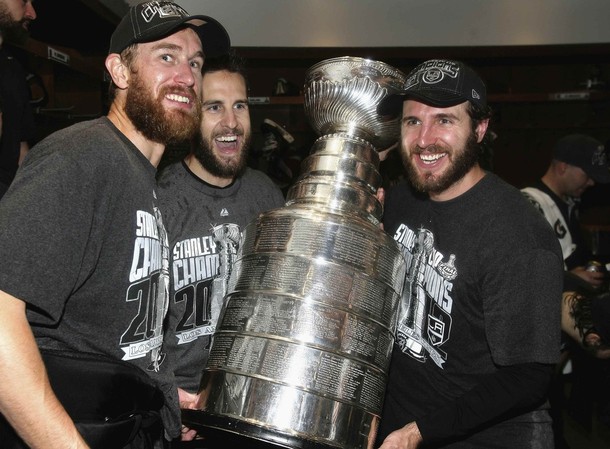 Last week the Los Angeles Kings won their first Stanley Cup in franchise history, defeating the NJ Devils in six games in what was a very competitive series.  The Kings have been in existence for nearly 45 years and before last week have never hoisted the oldest trophy in North American sports.  L.A. has had some phenomenal players over the years, including “The Great One” Wayne Gretzky who is without a doubt the greatest player to ever step on NHL ice.  Even with the “The Great One” though the Kings never were able to lift the 36 pound trophy until this season when a group of former Flyers began calling LA home.

The Kings, now known as “Flyers West” to many around the Delaware Valley, went on a remarkable run through the NHL postseason becoming the first ever eighth seed to win the cup.  They also lost only one time on the road during the playoff run, which is absolutely remarkable in today’s day and age of sport.  Many hockey fans in the Philly area came down with some very conflicting emotions during the 2012 Stanley Cup Finals.  On one hand we had the division rival NJ Devils who ended the season of our beloved Flyers, and on the other hand we had the LA Kings filled with Flyer connections not only on the ice but off the ice.

Aside from former Flyer captain Mike Richards and sidekick Jeff Carter, a few other notable former Flyers played a role in the LA title run.  Simon Gagne, a 12-year NHL veteran, only played in 37 games this season due to ongoing concussion issues, but was able to find his way back to the ice in time to participate in the Stanley Cup Finals.  He spent his first 10 seasons in the league as a Flyer, and was a major part of the Flyers success during that time.

Justin Williams, a former first round draft pick of the Flyers, was in orange and black from 2000-04. He provided a veteran presence to LA and recorded 15 points in 20 postseason games this year.  This was the second Stanley Cup victory for Williams as he previously captured one with the Carolina Hurricanes.  I recall Williams as a young stud when he first started out in the league with the Flyers but for whatever reason the team saw him as an expendable part.  Williams never became a stand out star in the league like Sidney Crosby or Claude Giroux,

but the guy always found a way to win and I knew from way back then he could have been someone that could have helped the Flyers get to the top at some point over the past decade.

Former Flyer goaltending great Ron Hextall serves as the Kings’ vice president and assistant GM.  Hextall never won a Stanley Cup during his 13-year NHL career but he was a key player in putting this LA team together for the 2012 title run.

And then we have former Flyer coach John Stevens who serves as the LA assistant coach.  Stevens served as Flyers head coach prior to current coach Peter Laviolette.  Stevens was fired as Flyers coach 25 games into his 4th year behind the bench during the 09-10 season.  During this season he spent 4 games as the Kings interim coach before current Kings coach Darrlyle Sutter was hired to fill the position.

It was quite a journey for the Kings one that many Flyer fans including myself became very jealous about.  I watched as each of these former Flyers lifted the cup and celebrated with the fans of LA.  Initially I was frustrated and disappointed these guys couldn’t get the job done while in orange and black.  A week later as I stop and think about it I realize these guys never really wanted to leave Philly and wanted to bring us a Stanley Cup.  Richards and Carter loved Philly.  They were frequently spotted out on the town and had places at the Jersey Shore.  They both signed long term contracts to stay in Philly but team management gave up on them and traded them away last summer.

When you stop and think about it the real villain in this whole thing is the Flyers themselves.  All along they misused Richards and Carter while they were part of the Flyers.  Richards was never meant to be a captain.  Over the years of his captaincy you could tell he was never comfortable with the role but the Flyers almost forced it upon him.  The guy was quiet and just didn’t seem to have the personality you expect from an NHL captain.  He was never a media darling like your captain should be and clearly wanted no part of being on the front lines when it came to answering questions during big moments and tough stretches throughout the season.

Jeff Carter while in Philly was looked at as a top scorer and was relied on night in and night out to provide a great deal of the offense.  Carter had some great seasons with the Flyers but never really produced in the playoffs the way he did in the regular season.  He always found a way to disappear come playoff time when he was with the orange and black.  All of a sudden this season he was lighting the lamp on a regular basis in the playoffs.  Carter even had 2 goals including the game winner in the game 6 clincher, something many of us never thought he’d be able to do here in Philly because he surely didn’t in 2010 when the Flyers were going against Chicago for the Cup.

At the end of the day these guys are just nice role players for LA.  Kings management knew they stole some great talent from the Flyers and if utilized correctly they could be effective and provide some nice support for the leadership already in place in LA.  Richards wasn’t relied on to be the leader of the team and Carter wasn’t relied on to provide a hat trick every night.  They were just two guys on the supporting cast that just went out every night and did the best they could.  The pressure was off these two during the playoffs along with the other former Flyers that participated in this year’s Stanley Cup Finals.

During the past few weeks the million dollar question to all Flyers fans has been would you still have traded Richards and Carter last year?  It’s a question that can be answered with another question….Would they have continued in the same role as years past?  One man’s junk is another man’s treasure and in this case we Flyer fans only have our own team to blame.  The Flyers misused Richards and Carter over the years and LA knew what role to put them in.  If Flyers management used them as part of the supporting cast for another set of leaders within the team who knows what could have happened.  With that being said congrats to Flyers West, hopefully we’ll see you next June.

Phils In Trouble, But Far From Finished