Phils In Trouble, But Far From Finished 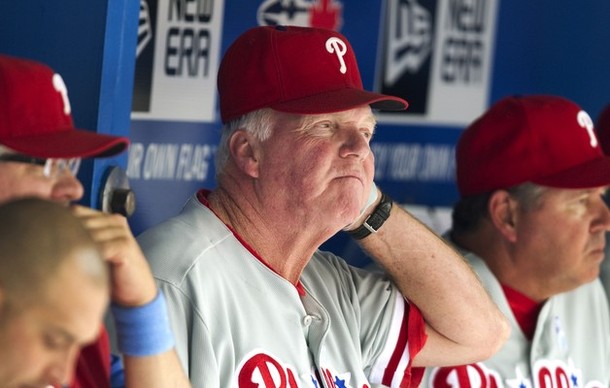 The month of June hasn’t been kind to the Phillies. After fighting to go 27-25 in the first two months, and stay within three games of first place in the National League East, the Phillies are now a putrid 4-12 since the calender has flipped to the third month of the baseball season. They’ve fallen all the way to nine games back in the division. The pitching staff is in shambles. The offense is inconsistent at best. The team as a whole has played an ugly, uninspired brand of baseball during the last three weeks.

And yet, its still too early to write this team off just yet.

The Phillies are still very much in play for the playoffs. While nine games may seem like too large of a hole to climb out from (especially with the roster’s current makeup), don’t forget that the Phillies were seven games out of first place on July 23rd of 2010, and were able to swoop down to claim their fourth straight division crown in the final two months of the season.

Next, ask yourself the following question. Are the other four teams in the division that much better than the last-place Phillies?

The Miami Marlins have won just two more games than the Phillies all year long, and have been completely healthy. They have a world of talent, but they haven’t meshed well as a team yet.

The Mets and Braves both have 35 wins, and both teams have limited ceilings. No one expected the Mets to be as competitive as they’ve been this season, and no one expects them to sustain even their current level of play. Atlanta is the same team they’ve been in recent years; a good team with a deep pitching staff, but they lack offensive firepower.

That leaves the Washington Nationals, the current division leader at 38-26. They’re clearly the most impressive team in the N.L. East, and have a world of young talent that has allowed them to blossom from bottom dwellers into contenders. However, “young” is the key word in that description. The Nats look great right now, but will they be able to keep up this pace over the grind of a 162 game schedule?

Not convinced that the Phillies can still make a run at the playoffs through the division? Then how about as a wild card?

Baseball’s controversial decision to add a second wild card this season could be the Phils’ ticket to Red October this year. The wild card field is wide open in the National League, and the gap between the Phillies and the logjam of teams in contention for those two spots isn’t large at all. The San Francisco Giants currently have the lead for the first spot at 37-30, and seven teams (Atlanta, New York, Miami, St. Louis, Pittsburgh, Milwaukee, and Philadelphia) could all be viewed as contenders for that final wild card.

Of course, these reasons for optimism are all irrelevant unless the Phillies can dramatically improve upon the product they’re currently putting out on the field. They can’t keep playing at such a miserable level while waiting for their injured stars to return. Cole Hamels and Cliff Lee need to pitch like aces, and guys like Jimmy Rollins and Hunter Pence need to step their games up to help keep the team within striking distance.

If the Phillies had just been able to play .500 ball in June like they had been doing all season, they’d be tied up with the wild card leaders, and only five games out of the division. Right now, they’ve caught a bit of a break with the entire division struggling over the last weekend. They can’t worry about their poor record, they’ve got to focus on what they can still accomplish in the long-term. If they can just keep things close, and at the very least not lose much more ground between now and the All-Star break, they’ll still be in position to make a run in the second half of the season, a time of year in which Charlie Manuel’s teams traditionally do their best work.

Ultimately, its going to come down to what kind of impact Roy Halladay, Ryan Howard, and Chase Utley can make on the team once they return from the disabled list. All three are major question marks because of their health concerns, but each one of them also has the ability to make a dramatic impact on the team that could push them into the top five records in the National League by the year’s end.

There’s still a chance for the 2012 Phillies, but they need to start playing like it.