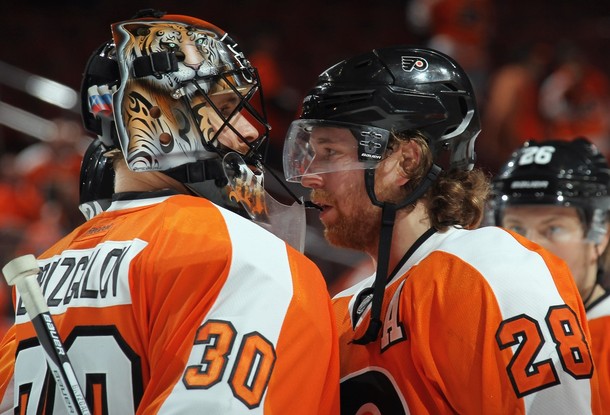 The 2012 NHL Entry Draft is three days away and with free agency looming soon after, I’ve collected many of the reports floating around regarding the Philadelphia Flyers and summarized them below for brevity.

All know it, right? He still thinks about the universe.

You never think about it not?

That is, for you it would be difficult if the team would play such a goalie like Bryzgalov?

Oh, yes. It would be very hard for me. It is different.

You can not believe the goalkeeper, who loves to talk?

I do not know. I’ve never played with him, so I can not say anything bad about him. But it’s very hard when you have a team player in the head which is something completely different. And he is your goalie. He is obliged to make good saves, bad. And then – you come to the game and have no idea that your goalie will make today. I would prefer to play with a goalkeeper who thinks, how to stop the puck, and not thinking about the universe.

Notes From Phillies’ 7-2 Win Over Colorado