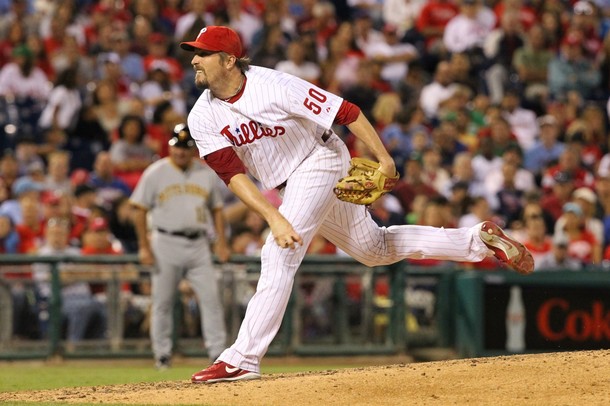 Chase Utley’s return to the major leagues was a smashing success.

The second baseman made his long awaited return to Charlie Manuel’s lineup on Wednesday night, and made an instant impact by crushing a home run in his first at-bat of the season. Utley added two more singles to finish the game 3-5, and played a major role in the seven runs that the Philadelphia offense produced. The former All-Star said that he’s feels better than he has in some time, and is ready to make a serious impact the struggling ballclub. That was the good news.

The bad news is that the Phillies needed to fill a hole in the starting rotation after playing a doubleheader on Sunday (and no day off on Monday), and in lieu of calling up a spot-starter from the minor leagues, Charlie Manuel’s staff concluded that the best option was to ask one of baseball’s most undependable bullpens to throw all nine innings. Sure enough, the plan backfired and turned a winnable game into a loss.

Wednesday’s game fully displayed just how dreadful the Phillies’ bullpen really is. The group is unreliable at best, with literally half of its members unworthy of a spot on a major league roster. They finished Wednesday’s loss by giving up a collective 11 runs on 14 hits.

Raul Valdes got the call to start the game. The lefty pitched a clean first inning, but made a critical mistake in the top of the second. He hung  an 88 mph fastball over the plate to Pittsburgh’s Mike McKenry, who crushed a home run with two on and two out to give the Pirates the lead. Valdes elected to go after McKenry instead of pitching around him, and trying to get pitcher James McDonald, who was on deck.

Valdes was relieved by the ineffective Joe Savery, who went on to give up five runs in his 2.2 innings of work. The young lefthander managed to pitch a scoreless third inning, but the Pirates quickly caught up to him and knocked him around for five runs on five hits and two walks.

Michael Schwimer and Jake Diekman were able to stop the bleeding, and kept the Pirates off of the scoreboard in the sixth and seventh innings. And while the two young pitchers did their jobs, the offense rallied for five runs in the same two innings to make it an 8-7 game entering the eighth inning.

And then along came Chad Qualls. The veteran had been on a bit of roll as of late, having not allowed a run in his last nine appearances. However, it would seem that the only thing that such a streak meant was that the former Padre was overdue for an implosion. He destroyed any thoughts the Phillies had of completing a comeback last night by allowing three runs on three hits (including a two-run home run to Andrew McCutchen).

The way the bullpen has struggled this season, its been a miracle if Manuel can get two quality innings a night from them. The Phillies could have gotten away with a bullpen game a couple of years ago when they were stocked with reliable arms like Chan Ho Park, Chad Durbin, Scott Eyre, Ryan Madson, and Brad Lidge. But this is a completely different unit, and the cupboard is now bare. To expect this group to play a full nine innings and even keep the team in the game was a major stretch. By asking the bullpen to pitch an entire game, the Phillies sentenced themselves to a loss before they even took the field.

Who Might The Sixers Target In The NBA Draft?