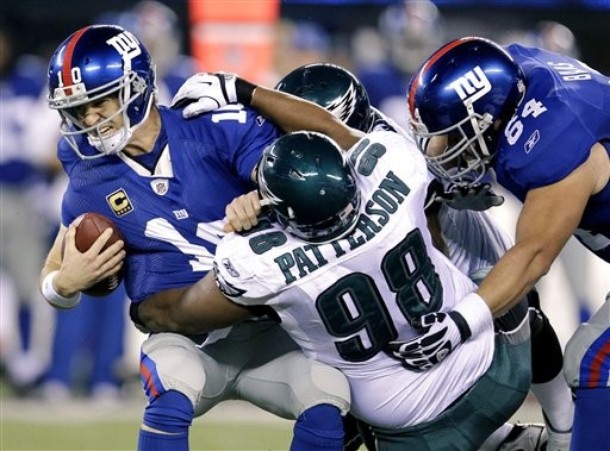 Back in January, Eagles’ defensive tackle Mike Patterson underwent surgery on his brain to treat an AVM formation (or a tangle of blood vessels in his brain. The former first-round pick has spent the last six months rehabbing from the surgery, but the recovery has not gone as well as the Eagles would have hoped, and the veteran will be out of action for at least the entire preseason, and possibly the start of the regular season.

Eagles’ trainer Rick Burkholder believed that Patterson would be ready to go in time for training camp, but the defensive tackle hasn’t been healing as fast as the team thought he would, and it’s possible that he could be a couple of months away from being cleared for football activity. Patterson’s condition is a very serious matter, and the Eagles will not rush the former USC standout back to action until he’s completely healed.

Fortunately for the Eagles they have a great amount of depth at defensive tackle, and Patterson’s absence will mean more reps for top draft pick Fletcher Cox. He’ll likely get the majority of the first team reps alongside Cullen Jenkins, with veterans Antonio Dixon and Derek Landri also in the mix.

The Eagles also made a minor trade with the Indianapolis Colts on Sunday, swapping a pair of players that are longshots to make an NFL roster. Philadelphia sent cornerback D.J. Johnson (who has been with four teams since going undrafted in 2009) to the Colts in exchange for former Penn State defensive tackle Ollie Ogbu (who was undrafted a year ago, and signed during the season by Indianapolis).

GCobb.com is looking for high school and college students who want to write about their football teams. Contact DBasens@ycp.edu

Fletcher Cox will start, and Cedric Thornton will get the last DT spot while Patterson ends his season/career, on the PUP List.

First predicted by Paulman, and second by GMCliff.

Sorry to hear about this and best wishes for the long-term health of Mike Patterson.. I believed and stated sp many times all off-season that the Eagles were planning to move away from Patterson and would really want him to retire instead of putting them in a difficult position of playing him and then having a chance of playing football and re-injuring himself with a potential life-long debilitating typs of injury. i know that’s a lot of ifs, but a public relations niightmare and especially in the todays NFL where the focus is so much on head and concussion injurues,,, Why even take the chance and the Re-Signing of DT Derek Landri solidified this with me after also Drafting DT Fletcher Cox whidch gives them 4 SoliDT’s (C Jenkins,A Dixon) and young practice squad player from last season Cedric Thornton, who I believe will be a sleeper player along the DL this Summer Camp.. I believe and sated the Patterson will be placed on PUP (to save a Roster Spot) and probably be out all season (so he can collect his salary in full) and then next off-season will come to a medical agreement to retire from the sport of Football… I truly believe that Mike Patterson will never play in teh NFL again for any Team,,

GMCliff… great minds think alike, ha ha ..
I really like this Cedric Thornton and believe he will be one of the big surprises
of Summer Camp (along with WR/Returnman Mardy Gilyard)

and the speculators are off.

Boy you two really love to make ASSumptions and jump to conclusions.

Paul, his AVM is corrected. The issue is the skull healing. It takes time, and it’s not completely healed yet so him baning helmets would be dumb. But he’s going to be at camp doing workouts. It’s a matter of time before his skull heals. That’s all.

But keep trying to pad your sore sore ego by predicting things and hoping they turn out to be true. You clearly really need that ego fulfillment.

Schill – serious question – I know a lot about rehabbing muscles, ligaments, tendons (I took a couple Athletic trainer type courses when I was coaching) but how do you re-hab from this – or is it just a matter of time and waiting – I know some dudes that got some brain injuries in IRaq and Afgan and that stuff seemed to hang around for ever… just asking becuase I really don’t know – I wish Patterson well.. but know I understand why the signing of Landri, the drafting of Cox, k,eeping Thorton around – trading for the old Penn State DT – made sure they had a plan if PAtterson wasn;t back –

Also, GM, fletcher Cox will likely not start. As Tommy Lawlor pointed out MANY times already on his igglesblitz blog, there are SPECIFIC DT POSITIONS iin the wide 9. And Mike Patterson’s position – NT – nose tackle – was for a run clogger guy to take on doulbe teams and eat space – that’s not Cox. Cox is more of a penetrating guy – suited for the UT (up tackle) position which Jenkins plays. They’ll most likely rotate Jenkins/Cox and have Landri/Dixon play the other spot.