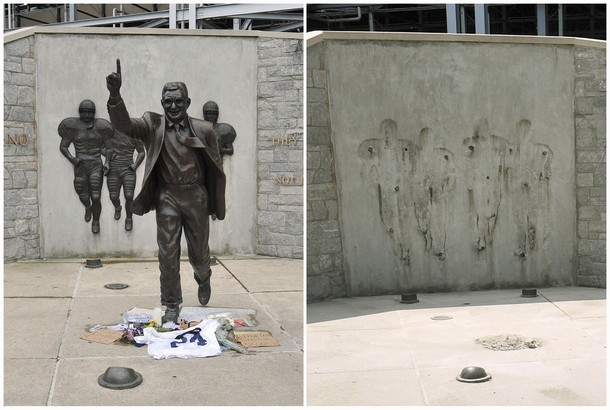 Yesterday the Joe Paterno statue was taken down, today the NCAA has all but taken down the Penn State football program, which he built.

“In the Penn State case, the results were perverse and unconscionable,” NCAA President Mark Emmert said.

“No price the NCAA can levy will repair the damage inflicted by Jerry Sandusky on his victims,” he said.

The penalties are harsh, but I believe they’re legitimate. What the Penn State leadership did can not be tolerated.  I think Paterno was trying to protect his legacy, while Penn State president Graham Spanier, athletic director Tim Curley and vice president Gary Schultz were trying to make sure the money kept coming in.

It’s ironic that if they had blown the whistle on Jerry Sandusky, Paterno’s legacy would have been preserved and the revenue would have continued to flow into the university.

Penn State is being fined $60 million dollars.  They will lose 10 football scholarships per year.  They will vacate all their wins from 1998 to 2011, plus they will be ineligible for post season play for four-years.

All current Penn State football players will be able to transfer out of the school  immediately and play for other schools this year.

Vacating the wins will take away Joe Paterno’s place as the winningest coach in NCAA College Football history.

Again I agree with the punishment.  The NCAA cannot allow schools to make these type of morally bankrupt decision.

Winning at all costs in order to make money is really what the NCAA is all about and it’s the reason that Spanier, Schultz and Curtley covered over the Sandusky sexual abuse.  It’s ironic that Spanier was a main figure at the NCAA meetings. Spanier and Emmert were very hard on Ohio State and USC in previous sanction cases.

The NCAA is in place to make sure the big schools are able to continue bringing in the huge revenues.

Notice that the NFL is spending money and changing rules in order to deal with concussions of their players.  We are all now aware that playing football has major risks when it comes to head injuries.  The NFL is shortening the practices and limiting the hitting in order to protect the health of the players, but the NCAA has done nothing for college players.

Do see how egregious that is?  They have done nothing to protect the young men who go out there and bash their brains inside those helmets.

Shouldn’t Emmert and the NCAA be focusing on the “concussion issue” which is affecting the lives of its players?  He and the NCAA won’t even bring up the subject.  They say they care a great deal for the welfare of their student athletes, but have failed to do anything to protect them from concussions.

They won’t even mention the issue.  The players who go on the field are risking their future health, but the NCAA hasn’t even looked into it at all.

The reason they’re not looking into the issue is because it could get in the way of the billions of dollars of revenue and that was the same motivation for looking the other way as Jerry Sandusky raped youngsters.

“The Love Of Money Is The Root Of All Evil”.