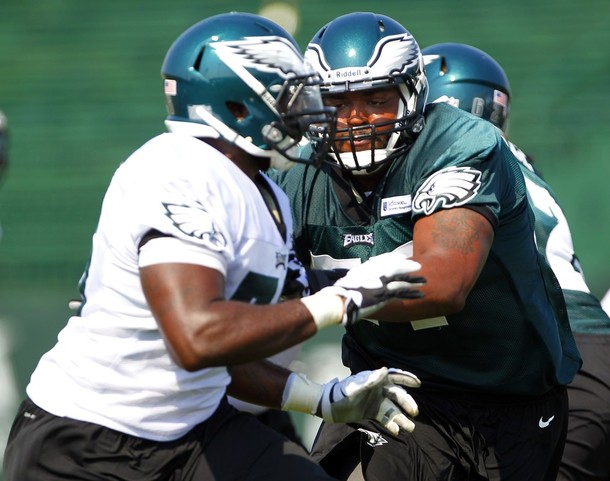 The one-on-one drills were between the offensive line and the defensive line was very interesting.

Third-year defensive end Brandon Graham was the star of the drill.  He won each and every rep he was given and seemed to get off the quicker than all of the Birds defensive ends.  He performance was so dominant that Eagles defensive line coach Jim Washburn had to pull him to the side and give him a hug.

Graham was flying off the ball and seemed to be playing at a different speed than everyone else. The former number one pick displayed tremendous strength by tossing around  did a nice job coming off the corner.  He won each and every time he lined up.

They should never match up Graham on rookie Dennis Kelly again.  Would somebody send Kelly a text and tell him that Graham is sacking the quarterback, so he needs to get out of his stance?

The former Michigan Wolverine finished things up by beating starting right tackle Todd Herremans by doing a push and pull move.  Graham rag-dolled Herremans after he got him to move his feet.  A smaller defensive end like Graham can get physical with a big offensive tackle after he gets him moving.

Eagles starting offensive left tackle Demetress Bell impressed me with his quick feet and body control.  He did a nice job of nullifying the speed of Trent Cole, when the former All-Pro tried to beat him by faking outside and coming back inside.  Bell adjusted the move and stood Cole up.

His next time up, he manhandled Darryl Tapp who was trying to get around the corner.  Tapp got some revenge when he beat Bell around the corner during their final battle.  He didn’t come totally clean, but was able to beat Bell with some good hand fighting.

Great News indeed, If Bell can play on his own at LT, this will be huge for the Eagles Offense.. Graham is off to a great start so keep it up and the sky’s the limit for this DL..

Im really rooting for Graham, the kid got labeled a bust after being injured, whats great about it is that nobody is expectinh much from him, this kid might end up killing it considering he wont be starting and coming in fresh all the time.

Can’t Label this kid a bust yet. Was off to a hell of a rookie year before suffering a major injury. Wiped out his second season. He’ll put up close to 8 sacks this year as a backup. May get 10. Ok he’s no JPP but I think he’s a quality player.

Btw, what is up with this site deleting some of my posts?

Barring any health issues, our D-line is going to be insane. The size & speed I’m seeing this year is night & day better than last year. Landri is taking most of Pattersons reps & looks good. Cole, Babin & Jenkins are norm. Cox, & Curry are pleasantly, bigger & faster than I thought. I hate to let down the Graham haters, but he looks lean, mean, quicker, & on a mission. Bye Tapp. Boykin IMHO, is going to be a great 3rd/ nickel/ slot corner. Seems to have great speed/ 1st step/ instincts. Bye Joselio! Our entire LB Corp are lightening quick. If Kendricks can get over the height disadvantage, no one is going to outrun, or out leap him. He’s a keeper. Ryan’s looks healthy, smart & a leader. Asomugha & DRC, playing up at the line, mostly, bump & run. ME LIKEY! Good riddance, MESANTE! I don’t like seeing Asomugha inside on TE’s though. Get it out of your head Castillo/ Bowles! The safeties don’t particularly look impressive, neither does the interior O-linemen, in particular Watkins & Mathis. It’s still early. Bell looks great. Very fast, light on his feet. If Vick & our WR’s stay healthy, we will be deadly. Maclin is bigger & catching pretty good. DJax is DJax, other than barfing. LMFBO! He wasn’t they only one, couple of the linemen & my oldest Son chunked too! It was about 100% on the field yesterday. I still laughed though. Where’s the pickle juice Andy?!? BTW, He looks like he dropped about 50-75 LB’s. Good for him. I really like the look of our young RB’s Shady, Brown & Polk. See ya Lewis! Trent Edwards blows. Kafka has a worse arm than Kolb, LOL!!! Foles looks promising. Our TE’s are going to have issues! Celek is already hurt, & Harbor can’t catch, or block. Go Birds!!!

Riley Cooper , broke his collarbone today, injuries are part of the game. Mcnutt looked great in practice today and Im hoping that he wins the job from Cooper anyway. mc nutt is more athletic than Cooper. We needed Cooper for the redzone and he’s had a chance to show what he can do, next man up

Bd news…HELL HAS LITERALLY FROZEN OVER… HAC agrees with DCAR.. Every word

Fantastic Update DCar……How does Damarius Johnson look? What are the chances of Gilyard to make the team (update for Paulman)?

Graham is ass….maybe we can get a 7th round pick for him too.

HAC, Johnson is lightening fast & very well, might be the fastest on the team, but I have a feeling once ST’s start hitting, he’s going to get killed. Dude is no bigger than 5’7″ 150-160. He’s no bigger than Dion Lewis, & my 14 year old Son, towered over both of him. I don’t think he makes the cut. Cooper out 6-8 weeks, & didn’t think he made it anyway. McNutt will be #4. Good size, hands, fairly quick for his size. Might open the door for Plax, if he doesn’t progress in pre-season games. BTW, Reid actually is a completely different person, physically, & attitude wise. D-Gunn is a nice, classy & very savy dude. Reuben Frank is a blow hard, dill hole. Just saying.

Songs, he doesn’t look like @$$, right now. He very well might be. Give him a chance to redeem himself in some games first. Are you that desperate to be right about him, that you won’t even give him a shot, to prove that he can still contribute, or be a player? Dude, he tore up his knee & had microfracture surgery, you don’t recover overnight, from that. It also wasn’t his fault that dumb@$$ McDermott & Reid, played him, out of position, at DT for 40% of his snaps. We still have plenty of time, to rip him.

Very impressive DL for this squad and can become the most elite for years to come but as of now the NYG remain as the top DL in the entire league. JPP is scouted now as the best in the league which at this point we just want to see what Brandon Graham can give us game by game. It’ll be interesting watch the two sides trying to prove whos better but for now im giving the nod to the NYG.

Hey Suck, I agree with you that the the best Dline title still belongs to the NYG. The one thing that I would ask is, do you think that the supporting cast around JPP is ascending or declining? Osi at 30 had the 2nd most sacks during the regular season in 2011. The next highest total of the DL was 5, among them was Justin Tuck. They turned it on in the playoffs and got the chip. But I don’t see this group certain this group as on the rise but maybe as solid as they were last year.

The Eagles on the other hand Tied for the league lead in sacks in which 92% of their sacks came from the DL and play in front of a back seven that blew coverages ALL year last year including the final 4 games they won. There is currently an expectation that with the departure of Johnny Lynn and the addition Todd Bowles now handling the secondary, if the secondary and LBs play just marginally better, the Eagles DL may have scary good season. Still haven’t seen anybody play yet so it’s pure speculation at this point but I’m willing to bet this may turn out to be one of better DL group assembled in the Reid era. Better than the Giants. No. Because as we should all know from last year, it doesn’t matter what your name is, how special you might be or how much talent may have been assembled, it only matters what you do on the field.

Derek Landri said it best: “Win my down, win games”. That pretty sums it up.

Sorry for the type-os, missing words, etc. my High School English teacher would kill me. Lol.

DCar, thanks for the update……You cant hit what you cant catch brother….look for him to make the team, and be one of our favorite players this year.

Sorry I can’t respond as I usually do. The Website keeps erasing my comments. I logged out, then logged in again and it seems to be working fine now.