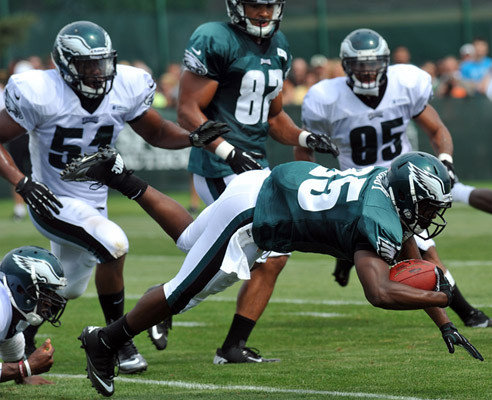 The Birds just left the field after their morning workout at Lehigh University and head coach Andy Reid talked to the media following the workout.

The Eagles players got into a few fisticuffs, but I didn’t think it was a big deal.  It shows that they’re emotionally charged up for the hitting.

Eagles back up wide receiver Riley Cooper fractured his collarbone yesterday while trying to make a catch on a long pass.  Reid let us know today that Cooper will miss six weeks.

Defensive end Jason Babin who strained his calf muscle is expected a miss a week.  Babin will have an MRI tomorrow.  Reid had been concerned that Babin’s injury was an Achilles tear, but pleased to find out that it wasn’t.

Brandon Boykin had a nice day yesterday breaking up a number of passes.  He broke one pass by Mike Kafka which was intended for wide receiver Chad Hall, but pass interference was called on Boykin.

Dominique Rodgers-Cromartie had a magnificent prsctice yesterday and he knocked down quite a few passes and intercepted a long pass which was intended for DeSean Jackson.

“You know the one thing with him is you’ve got to try to stay foot-to-foot”, DRC said about the play after the practice. “It’s hard,

but the ball was underthrown and I saw it slow down, so I got my head around it and was able to make a play on it.”

Throughout OTA’s, now in the training camp DRC has made a habit of showing up to knock down the ball after the quarterback has let it go.  He may have the fastest catchup speed that I have ever seen.

“It depends on how the ball is thrown,” he said. “Nine times out of 10, when a quarterback sees a receiver in front of you like that, he tends to float it and let him run under it. That’s giving me the opportunity to make up on him.”

Brandon Graham continued making his statement.  He had dominated on Friday during the one-on-one and team drills.  On Saturday he stepped up his statement.  Graham beat Todd Herremans a couple of times during practice and seemed to live in the offensive backfield.  The former Michigan Wolverine would had a sack on Michael Vick if the linemen were allowed to hit the quarterbacks.

Notes From Phillies’ 6-2 Loss To Atlanta

How does Chad Hall keep getting an invitation to Eagles camp? Sure, he’s built like Wes Welker, but he sux. Riley Cooper is no big loss because he doesn’t belong in the NFL either.

Riley Cooper is still getting invites to training camp???

It’s a good thing Babin didn’t run with the bulls and get a calf strain in the process.

I agree. I just hope Cooper does not make the team. He has had plenty of chances. He only looks good in training camp and does nothing the rest of the season. It is unbelievable that he is in camp this year and not Burress.

Burress is done, give it a rest….He sucks. I’ll take Cooper over him everyday of the year, because at least Cooper can get some separation. You are stuck in the past hoping Burress can catch lightning in a bottle, and be reincarnated into what he was 7 years ago….No thanks…He’s done.

what site can i go to that wont delete comments?

I don’t think cooper or Hall will make the team.

The Eagles need to grab Burress immediately…8 TDs last year…8 more TDs last year probably would have been the edge necessary to get into the playoffs for the Eagles. I’m sure he’s asking for crazy money (which he’s not going to get) but the Eagles really should stop acting like they couldn’t use Burress to great effect.

This bum never did anything anyway. This is a non story.

gmcliff? When did you witness Riley Cooper getting separation?

How many TD’s did Cooper have last season?

Burress could be had for $1.5 Million, Remeber the Eagles have $14 Million in Cap Space and need to spend about $10 Million of by the early part of September to be within 95% of the Salary Cap as mandated by the CBA..
I expect Maclin. DRC to get new contracts by the end of SUmmer Camp/Preseason and possibly Center Jason Kelce to lock him up too