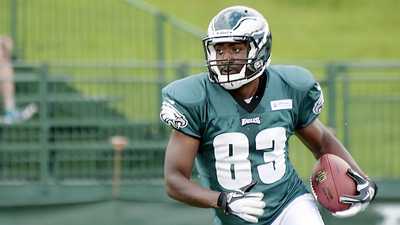 The door is wide open for Eagles rookie wide receiver Marvin McNutt with Riley Cooper sidelined for six weeks.  He could earn himself a spot on the team if he can prove that he can produce.  Cooper hasn’t distinguished himself on a consistent basis, but he did have a very good game last year when the Birds beat the New York Giants.

Head coach Andy Reid let everyone know this weekend that the Birds aren’t going to add a wide receiver from outside the organization because of Cooper’s injury, so that means opportunity for McNutt and the other backup wide receivers currently on the roster.

McNutt is starting to assert himself at training camp with his size.  He can’t run away from coverage or juke out cornerbacks, but he can go up and take the football from defensive backs.  That’s his strength, going up and taking the ball from defenders.

The former Iowa wide receiver doesn’t stand out much when the team workouts n the shorts, but he’s standing out with the pads on by taking the football from defenders and turning heads.  I think he could be a factor in the red zone because of both his size, strength and his height.  He would be a good rebounder if he were playing basketball.

McNutt talked yesterday about fashioning his game after teammate Jason Avant because his wide receiver coach in Iowa had coached Avant at Michigan so he had McNutt study tapes of Avant during his time at Iowa in order to learn how to play the wide receiver position.  McNutt was switched from quarterback to wide receiver at Iowa.

“That was one of the first films I watched, one-on-one tapes and red-zone one-on-ones. How he worked his technique, his release and his hands … Coach Campbell told me he wasn’t the fastest guy, but he was one of the hardest workers, that he came to work every day,” McNutt explained to Philly.com’s Les Bowen.

It was another day of Dominique Rodgers-Cromartie putting on a show with his catch-up speed.  Rodgers-Cromartie knocked down numerous passes and picked off others.  We really got the chance to appreciate the speed and athleticism of this former Tennessee State cornerback.

He was timed in a 4.29 forty-yard dash and he’s every bit that fast.  Rodgers-Cromartie did get beat deep one time by DeSean Jackson but there a few other times when he ran step-for-step with Jackson and knocked the ball down on deep routes.

LeSean McCoy got a lot of work yesterday.  He carried the ball in live drills at least ten times and one of those runs resulted in a fumble.  McCoy made a few big runs, but the Eagles defense did a good job against him for the most part.

Second-year safety Jaiquawn Jarrett was the guy who caused the fumble by McCoy.  He knocked the ball out while making an open field tackle on McCoy.

“You attack the ballcarrier as well as the ball,” Jarrett said. “Just going in for a strip attempt.”

On another play Jarrett attacked McCoy and cut him down after he’d made a gain of 16 or 17 yards.  Jarrett is fighting to make the roster with Nate Allen, Kurt Coleman starting at the safety position right now.

Rookie seventh-round draft pick Bryce Brown put on quite a show by consistently gaining six to ten to fifteen yards on each of his carries.  He ran with power and definitely has a burst through holes when he gets the ball in his hands.

Brown did drop a couple of passes during the workout which was a negative.

Brandon Boykin made a great one-on-one tackle of LeSean McCoy in the open field in a 3rd down situation.  This young man isn’t just a athlete, he’s a football player, who has no problem hitting people.    I would like to see him play safety because he can hit and cover.

Number 72 Cedric Thornton has been showing up big time in the one-on-one drills.  He’s very quick off the ball and seems to have gotten stronger in the off season.  Right now he’s fighting up hill with Derek Landri and Antonio Dixon behind Cullen Jenkins, Fletcher Cox and Mike Patterson at the defensive tackle position.

The key to the defensive tackle position will be what they do with Patterson, if he’s activated it will mean Thornton, Landri or Dixon taking a walk.  Landri is starting in place of Patterson right now, so it will be up to Thornton to catch him.  Landri was very effective a year ago and he continues to stand out.

“He continued where he left off last year”, Eagles defensive coordinator Juan Castillo said about Landri. “He makes plays, he’s quick off of the ball and he is a professional.”

Who Could The Phillies Trade Before The Deadline?