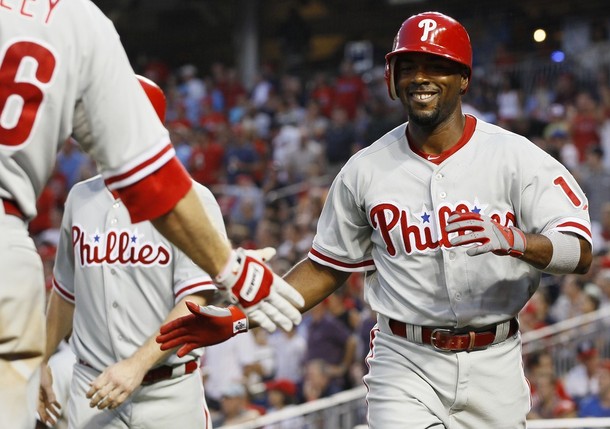 The Phillies won their second straight game on Wednesday night, edging the Nationals 3-2. The win improves the Phils to 47-57, 14.5 games out of first place.

I guess you gonna judge Brown every game he plays all I need is for Brown to play good defense in the outfield unlike Pence and that’s why Pence got traded.

Turk get used to it on this site… Bunch of knee jerk reactions. No mention of the outfield assist by D. brown. I guess that doesn’t count. So instead of mentioning the assist they say ‘at least there were no misadventures. Typical
Bunch of Angelo catadi’s on this site

Great throw by brown, plus arm, his bat looks quick, or at least not as loopy, let’s hope for a strong finish for him

i love how people like you complain about the quality of the work on a site…and yet you’re one of the tools coming back everyday, commenting, and helping make the site a success.

It’s time to play OF Brown everyday to see if he can be a consistent everyday player.. and hopefully he is for the Phils don’t have a lot of options and Brown’s Athleticism is off the charts and should only improve with consistent playing and help his Confidence, The Phils need him as they move forward so let’s support the guy and he’s only 24 years old I believe…

but your right though…it is a bunch of angelo cataldis on this site…or in other words, people that do their jobs well enough to rile up twits and simpletons like yourself into posting irrelvant comments in which you pound your chest about nothing while in reallity, you’re just a 0 trying to be a 1 with nothing meaningful to say

jake, with all due respect, what Dom Brown are you watching? He’s waving on every swing. He is 1-5 with a seeing eye single, 3 week dribbling ground outs, & a weak fly out. He sucks & is not the answer. hac, Brown is a defensive carbon copy of Pence, albeit a black, left handed version. He has a strong arm, but a butcher in the field. I guess I’m making that up too? Yes, let’s pray that he can at least, not embarrass himself, again. He’s being given a huge opportunity, let’s hope he has the intestinal fortitude, & brains to get it done.

Dom Brown is a young upstart who hasn’t been in the majors since 07 like Pence. He also isn’t being paid $15 mill like Pence. So any suggestion that he somehow sucks with very little “consistent” opportunity to show if he can get it done on this level, reeks of idiotcy.

I never said he’s a great fielder. I said its funny how people focus on the negative and that he did contribute in a positive way. I said nothing more. Nothing!
I held my breath with the shot to left in the 9th like everyone else, but he did make a contribution. He moved a runner with a grounder to second, not spectacular but what a major leaguer should do. And before you call all &$$)(&@&$ on me I’m not clearing a ground out… I’m saying it was a positive

Not sure if cig meant the site owners or its selected writers; but I’m sure he was speaking about a small cabal of “cataldis”(members) that exist on this site. And he’s right.

But 76ers is correct I shouldn’t let morons piss me off. They can’t help themselves. It’s not their fault and I will not let them frustrate me… Just like when cataldi second guesses whines, complains I turn the channel and ignore I should do the same here

hac, good, ignore the site all together, & go away, because you are the biggest moron on here! Don’t pawn off your insecurities, stubbornness, delusions, idiocy & irrationality, on everyone else, because they aren’t an clueless, excuse making, pom-pom waving, blind loyalist, like you. IF THE TRUTH HURTS, GO AWAY! IT’S THAT PLAIN & SIMPLE!

its pretty entertaining for the rest of us

Don’t worry 76 I will read but I won’t let idiots get me any more. I like to read and keep up with things and when I see things will comment.mi know that when a person says ‘signifng so and so for x dollars for y years is a mistak and that’s a FACT’ that by definition it’s actually an opinion… Those are the idiots to ignore

I had two jobs in college many years ago… Bartender and working at a mental health facility and learned not to argue with drunks and crazy people. I forgot that lesson!
Tough jobs but I have some all time funny stories from both!

Are you sure, you aren’t one of the residents, of that mental facility, that escaped?!? Because you sure as hell act like you are. Go grab a beer, & lighten up, & STFU, numb-nuts!!!!

Wow that line up last night was looking like murderers row! We better spend some money on a hitter or two this off season!