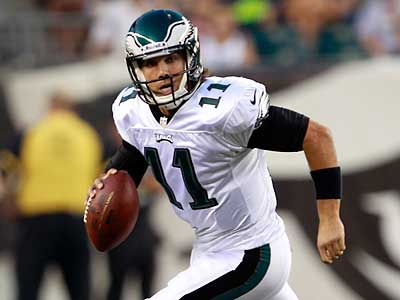 If it was a fair competition, Trent Edwards would make the final cut over Kafka. But Andy Reid and Marty Mornhinweg have been in love with Kafka and his knowledge of the system from the first day of the training camp. I don’t understand why at this point they wouldn’t reconsider. It doesn’t matter how well a quarterback knows the offense is he doesn’t have the physical skills necessary to succeed on the field. It would do this team a lot of good to have another veteran quarterback around to help both Nick Foles and Michael Vick. What’s the sense in having two developmental quarterbacks on the roster?

There’s been some talk that the Eagles could stash Chris Polk on injured reserve to repair a shoulder injury. I hope they do so, because I’d hate to see them lose such a promising young talent.

Mardy Gilyard had a chance to push for a spot as the sixth receiver, but I just can’t see the team keeping six. Marvin McNutt had a couple of nice days at Lehigh, but then completely fell off of the map. Chad Hall still has a chance to stick on the practice  squad because Andy and Marty seem to love his ability as a do-anything gadget player. At tight end, both Brett Brackett and Chase Ford had good moments during the preseason, and should be candidates for the practice squad.

I think the Eagles are confident in young reserves Kelly and Vandervelde, but they could still look to add another veteran presence to give the backups a little more experience.

Tapp has been the odd man out all along. The Eagles are five-deep at this position, and even though Tapp has played very well this preseason, he’s caught in a numbers game, and his $2.6 million salary is more than enough to make him lose his roster spot.

I think if Dixon was really on his way out, the Eagles would have played him against the Jets to give other teams some more film on him. With Mike Patterson unavailable to start the season, Dixon still has value as a run stuffer.

I think Ryan Rau has played his way on to this roster as the backup middle linebacker. I don’t see how the Eagles can keep Casey Matthews on the roster at this point after he’s shown very little and spent the entire preseason nursing injuries. The other surprise cut I have here is Brian Rolle, who began training camp as the starter. The second-year linebacker has looked poor throughout training camp, and continued his struggles against the Jets. Keenan Clayton can’t get an opportunity to start, but he’s an asset to special teams.

I don’t think O.J. Atogwe did enough to make this football team. Jarrett was the on the bubble, but made a few decent plays against the Jets could save himself, plus the Eagles won’t want to give up on a second-round pick after just one season.

Eagles Who Played Well Enough To Make The Team