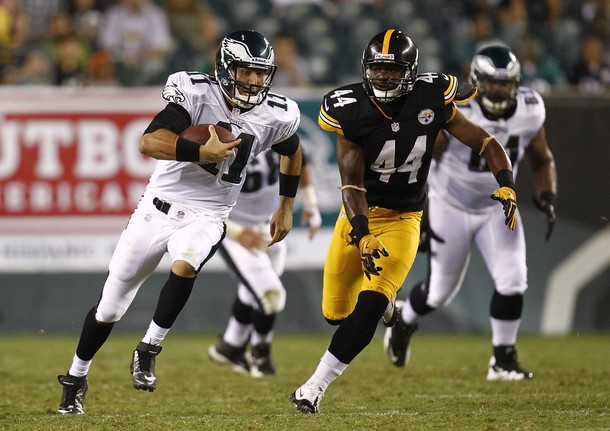 Tonight will be the last opportunity for a lot of guys on the Eagles 75-man roster to give Andy Reid a good reason he’s need to put them on his 53-man regular season roster.  Most of those decisions have already been made, but a number of them will be decided tonight.

On Friday night by 9pm, Reid and his staff will send that roster of 53 to the league office.  Here’s what I think it will look like:

Andy Reid showed how he felt about this one, when he said he didn’t need to see Kafka play this week to be comfortable making a decision about him.  It was a done deal for Trent Edwards, who will be given three quarters to earn himself a job for another team in the league.

Chris Polk will play for somebody in the NFL this year, because he’s a complete football player, who could help a team as s running back or fullback.

Havili will get the chance to make some big plays in the red zone on the ground and as a pass receiver.

Brett Brackett could wind up playing for somebody else this year.  He needs to play well tonight, but his game versus the Browns may have turned heads around the league.

Offensive line coach isn’t in love with any of the backups at the interior offensive line positions.  Vallos will backup Kelce at center and Kelly has shown that he can play both the guard and tackle position.

I think Chad Hall’s consistency and versatility have made a place for him on this team.

I see them trading Darryl Tapp for a future draft pick.  Antonio Dixon will be kept around to help the run defense.

Clayton needs another good performance tonight, but the blocked punt and deflection to set up the interception against the Browns will get him on this football team.

Hughes is on the bubble and needs to play well tonight.

I think Phillip Thomas has played well enough to make this football team.  His tackling and pass coverage have been impressive.  Can O.J. Atogwe stay healthy?  Can Jaiquawn Jarrett play better?  These are both troubling questions for the Birds, but I think they will go with the veteran because Jarrett hasn’t proven he can play on this level.

Chas Henry got a challenge from veteran Mat McBriar but he held on to his job.

Should The Eagles Keep Mike Kafka or Trent Edwards?