Trent Edwards Gets The Nod Over Mike Kafka 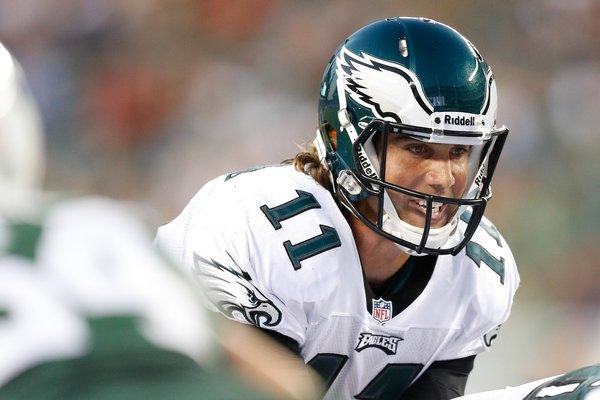 Eagles third year quarterback Mike Kafka is the odd man out at the Eagles quarterback position.  Jeff McLane of Philly.com was the first to report the decision by the Eagles and NFL.com’s Albert Greer has reported that the Eagles have been shopping Kafka to other teams.

Veteran quarterback Trent Edwards who came into camp as a long-shot, played well in each game and played himself onto the team.  He had a brilliant performance in his three quarters of work against the New York Jets last night and it put him over the top.

Kafka opened the door by getting his left hand fractured in the first preseason game against the Steelers.

Edwards outstanding in driving the Eagles for scores in each game he played.  He extended plays by showing surprising athleticism by moving in the pocket to extend plays.  The veteran was on target with most his throws.

This is another case of a quarterback playing his best football for Andy Reid and Marty Mornhinweg.  I think it’s going to be hard for the Birds to trade Kafka because of the way the Eagles have come out in the previous trades of their quarterbacks.

“There was great competition at the quarterback position,” said Eagles head coach Andy Reid. “That’s what football and training camp is all about. In the end, we had to make the difficult decision to let Mike Kafka go. Mike is a class act, a student of the game and a great person and I think he’ll have no problem finding a job in the National Football League very soon.

“On the other hand, I’m proud of the way Trent Edwards conducted himself since the early days of the offseason workouts. He had to fight for everything he earned this summer. He improved each and every day and made the most of every opportunity.”

The Eagles Have Cut Down To 56, Three More To Go

If the report turns out to be accurate, I truly think this is the smart move by the FO. I’m pleasantly surprised that an emotional attachment to Kafka or “what is or isn’t fair” wasn’t a factor.

I never understood Andy and Marty’s love of Kafka (or Kolb for that matter). Didn’t Marty say a few years ago that Kafka was one of the most intelligent gifted quarterbacks he had ever been around? I never saw anything to indicate this at all. He was weak armed and skittish just like Kolb (who is now the backup QB in Arizona). Both of them make terrible decisions with the football, and both will likely be ex-NFL quarterbacks within the year.

Like this move but can’t understand why Matthews is still an Eagle and Kau was cut…..Matthews is a damn bum!

Another nothing of a player “Riley Cooper is still here, and that bum can’t get separation in the NFL…….

Gilyard should have been kept instead of Cooper and I’m tired of Andy holding on these damn nobodies when clearly better talent is let go.

Let’s go beat Cleveland . McCoy should have a good day.dline will forcd an early pick or sack fumble.

Thomas will give us the extra receiver play this year. Hell take snaps away from Avant on some third downs? Will also be interesting to see how they employ shady in the pass game.im sure they’ve shown non of that in p.s..

Good call on a guy who won’t play this year.Mike goes the distance this year,Erocks lock.

Maclin or Dj to pro bowl…Id take jackson if it means deep balls all year.they need to establish that early as a threat.maclin will get behind some DBS too.sppedwise only the steelers compare to speed at that position.

Fletcher will be best dline rook in a decade.