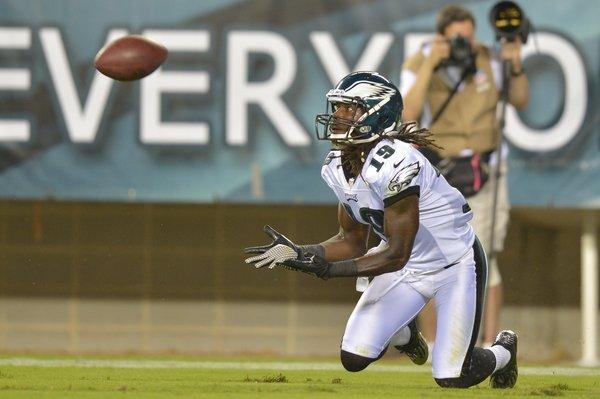 The Eagles have signed free agent wide receiver Mardy Gilyard and released backup safety Jaiquawn Jarrett.  Starting wideout Jeremy Maclin injured his hip in the win over the Cleveland Browns and might not be able to play on Sunday against the Ravens.

Gilyard was released in the final cutdown by the Birds.  Gilyard caught nine receptions for 151 yards and two touchdowns in the preseason.   He played well when he got the chance and especially in the last preseason game against the Jets.  The young wideout has good size and has the speed to get behind the secondary.

Jarrett had been a second round draft pick for the Birds in 2011, but had struggled to get in the lineup.  He had a poor game in the first preseason game against the Steelers, but came on to play better in the following games.

Carrier (6-4, 238) originally signed with the Oakland Raiders as a rookie free agent following the 2012 draft after playing collegiately at Beloit College in Wisconsin, where he set school records with 189 receptions for 3,111 yards and 29 touchdowns. He was released as part of the Raiders final roster cut down. Carrier also played two years of basketball at Beloit, starting 21 games and averaging 8.3 points per game. He attended Edgerton High School in Wisconsin.

Analyzing Week 1 In The NFL