Another Late Drive Gives Eagles Another One Point Win, 24-23 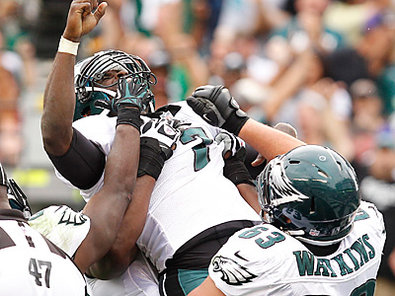 This was not the greatest game ever played but for the second week in a row the Birds drove for a late touchdown to give them another one-point victory.  The offense again put up big yardage with a total of 486 yards gained.  They won despite turning the ball over four times.

Eagles quarterback Michael Vick made some big mistakes during the game, but he kept his cool and made the plays needed down the stretch with the game on the line. Vick was 23 for 32 passing for 371 yards with a touchdown pass and two interceptions.  The left-handed signal caller was on top of his game on the game winning drive.   He took the ball in on a quarterback keeper to put the Birds a head to stay.

Yes, he’s got to cut down on the errant throws but getting the job done with everything on the line and leading the team to a win, gets you a pass.  It’s unlikely that they will continue to win if they keep turning over the football.

What can you say about Eagles running back LeSean McCoy?  He’s a great back, who ran for 81 yards on 25 carries against a tough Baltimore defense with a touchdown and a fumble.  The fumble cost the Birds points, but he makes yardages even when the blocking is poor.  There were a few plays where four Ravens were in position to tackle him, but he made all of them miss.  The guy makes more tacklers miss than any other back in the NFL.  He makes tackle look like they playing on ice.

Tight end Brent Celek had a huge day for the Birds with 8 catches for 157 yards.  He should have a big year because Vick and the coaches know that the tight end will always be covered by a linebacker. Teams can’t afford to use a safety to cover him because of the other weapons the Eagles have at their disposal. Quite a few times, Celek left blocking assignments and slid out into the pass routes.  Vick must continue to take what defenses give him by going to Celek.

Birds wide receiver DeSean Jackson played a great game, especially with that long catch he made despite getting smacked by Ravens safety Ed Reed.  That catch changed field position.  It was a great throw by Vick and just as good of a catch by Jackson.  The little guy caught 7 passes for 114 yards.

Eagles middle linebacker DeMeco Ryans played an excellent game against the Cleveland Browns, but he was even better against the Baltimore Ravens to the point where he could very well be the NFC Defensive Player of the Week.  Unofficially, Ryans had six solo tackles along with a big interception and a big sack, which were a major reason the Birds won the game.

Rookie nickel back Brandon Boykin made three or four pass breakups which came a key points of the game, especially on the Eagles last series on the defense.

Rookie linebacker Mychal Kendricks had five solo tackles and of course the final pass breakup of the game which sealed things for the Birds.

Birds safety Nate Allen led the team with nine solo tackles, one assist and one broken up pass one on the final defensive series.

The Eagles other safety Kurt Coleman was also very active in the secondary.  He made six solo tackles and one assist.  I love the fact that both Coleman and Allen are always around the ball and they’ve done a good job of not giving up big plays.

The Eagles defensive line had only one sack and that was contributed by Trent Cole, who knocked the ball out of Joe Flacco’s hand to set up the Birds first touchdown.  The line only had that one sack, but they were pressuring Ravens’ quarterback all day long.

Eagles Have Huge Upside, But Must Correct Their Mistakes