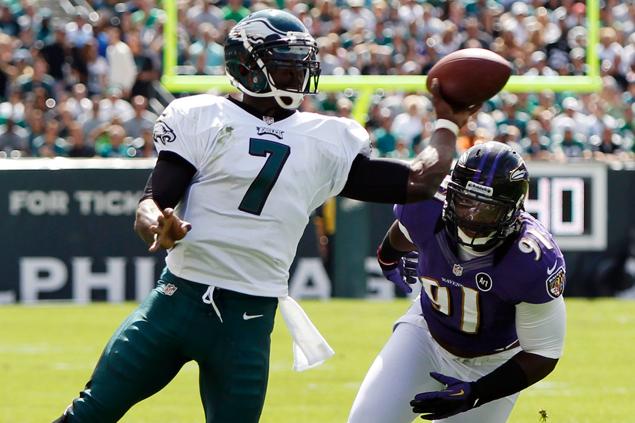 Michael Vick had his struggles against the Ravens, and turned the ball over three times.  However, unlike last week, nothing could keep Vick or the offense down.  Not turnovers, not injuries to starting offensive linemen Jason Kelce and King Dunlap, and surely not the Ravens defense.  The Eagles were forced to fight back the whole game, and they did.

People may worry about Vick and the offense’s turnover problems, but that’s unnecessary worrying.  Does the quarterback need to take care of the ball more?   Of course, but there’s one quality that the former Falcon, and this Eagles team share in common that makes them different from the “Dream Team:” HEART!  Were the first two wins pretty?  Absolutely not.  But by showing tremendous leadership and heart in the last two weeks, Michael Vick’s overall play overshadows any negatives associated with the turnovers.  With his team down by six points in each of the first two games, Vick led sound, balanced and precise winning drives.

Andy Reid echoed this sentiment “Michael and the whole offense continued to battle.”

Vick did battle and, besides from the turnovers, looked pretty good.  He finished 23/32 with 371 yards and one touchdown.  Vick looked accurate, and poised in the pocket. He didn’t try to do it all, but instead kept his eyes downfield and trusted his reads.  On the Eagles’ second touchdown, Vick rolled to his left and even as Ravens defenders came flying after him, he kept his eyes downfield and threw a perfect pass to Jeremy Maclin in the corner of the endzone.  Overall I thought Vick was sharp and showed tremendous improvement from Week 1.

The best part about the last two weeks is watching this Eagles team fight for victories.  No matter how ugly, or how error-prone, this team sticks together and finds a way to win.  No team in the NFL (except for the 49ers) is playing lights out right now.  Michael Vick understands this.

At times in 2012, Vick has looked as good or better than he was in 2010.  However, the awful turnovers just look like shots from the “Dream Team” all over again.  But what separates Vick and the 2012 Eagles from teams of the past is that the 2012 group is a connected unit.  There is nobody pointing fingers.  Instead, there is leadership from the top, starting with Michael Vick.  Everyone knows what they are expected to do.  As much as the turnovers are frustrating, it is admirable that Vick and the Eagles have shown they will never give up on any play, or game.  Ball security can be fixed, but heart is not something you acquire.  You either have it or you don’t.  It is that quality that will propel Vick and the Eagles to new heights in 2012.

Report: Jason Kelce May Have A Torn ACL