The Special Teams Could Cost The Eagles This Week 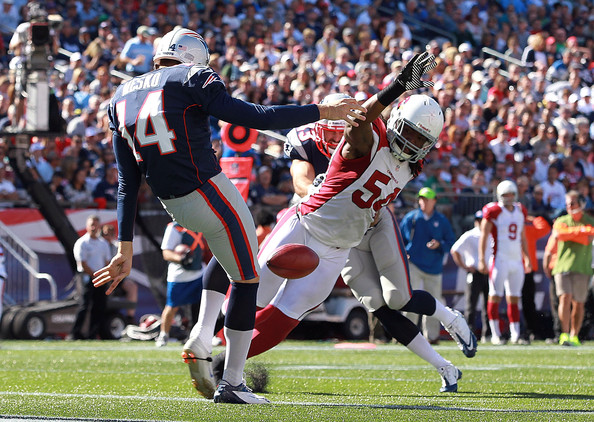 I expect Arizona to utilize a conservative game plan for their offense and try not to let Kevin Kolb throw the game away.  Their defense will be aggressive against the Eagles offense with zone blitzes, but they’re not going to use any defenses that are vulnerable to big plays.

I expect them to most aggressive against the Eagles with their Special Teams.  As I said before this is where the Cards have an advantage.

Arizona beat New England last Sunday because of their Special Teams.  They blocked a punt against the Patriots and could have blocked two.  They Cards has shown everybody that they can beat you in every area of the kicking game, whether it be by returning punts or kickoffs, or blocking a punt.

Eagles Special Teams coach Bobby April is probably getting very little sleep nowadays.  His units haven’t been special so far this season.  Last week the Ravens would have been able to get a first down on a punt fake, if their punt fullback, former Eagles Sean Considine, hadn’t tripped over somebody’s foot.

Eagles fans get ready to hold you breath every time the Birds punt the football to the Cardinals.  First of all Eagles punter Chas Henry has been struggling lately.

“He had three things he needed to improve on: his get-off time, his plus-50 punting, and his consistency”, April said of Henry.

April could have spared all those words and just said the kid needs to improve on everything.

We don’t want the blockers for the punt team to hear the ominous double thump of the ball being punted then being blocked, it could cost the Birds the game.

The other thing the Eagles have to worry about is Cardinals punt returner, cornerback Patrick Peterson.  He’s a threat to return a punt for a touchdown, every time he lines up back there.  He returned four punts for touchdowns during his rookie season.  The Eagles punt unit had better be serious this week because the Arizona punt return unit works very hard to get their blocks because they know each time they take the field can be a return for a touchdown.

“Well, he’s really talented, because he’s so big”, April said about Peterson. “It would be like if we had [LB] DeMeco Ryans back there returning punts and he’s fast. So, what happens is, he breaks a lot of tackles where a lot guys would go down. The coverage would stop him but he runs through it and he barely gets dented. So, he’s really a phenomenal athlete. Really phenomenal athlete. He’s of great concern”.

The Cardinals also have a home run hitter returning their kickoffs.  Their kickoff returner Larod Stephens-Howling has returned two kickoffs for touchdowns in his career.

Remember this while you’re watching the game, the Special Teams will play a big role in which teams win this one.

Eagles Should Be More Conservative Offensively

And so far the Eagles kick returns have been below average

Punts should be angled out of bounds to negate peters, kickoffs are trrible with new rules…less wedge…moved up kick location.

G-Man, thanks for posting an article on Special teams which I have mentioned a few times over the last week being a real weakness on this Eagels 2012 Team thus far.. Cards have excellent Special Teams and a real game-breaker in return man S Howling.. I have to see Eagles Return Players Boykin/D Johnson really let loose, they run a little tentative and appear to worry more about not getting hit or fumbling and you just cannot play this way in the NFL..
I’ve stated a few times, why is Bobby April one of the Top Paid Special Teams Coaches in the entire NFL, take away D-Jax’s fantastic individual performances on punt returns which he dod mostly on his own over the last couple years and what is special about the Eagles Special Teams Units since April’s arrival.. I believe in Points, Big Returns and in Field Position alone, this weak area of the Eagles Team will cost them 1-2 games over the course of this Season

Whatever, Cribbs is a great return man he had a decent game, but he did not kill us, nor will Peterson on the special teams kill us Colt Anderson is getting more healthy, and we are not going to be punting alot. So much for that! I think however that we will be kicking off plenty of times this game.

Our defense has shown the stregnth and potential to perform well when given adverse field position to defend.

I believe the SpecTeams will improve and thus could get us 1-2 games over the season.

Lock It up and grow a pair Eagles Fans, let me see your war face.

As always LONG LIVE THE EAGLE!!!!!