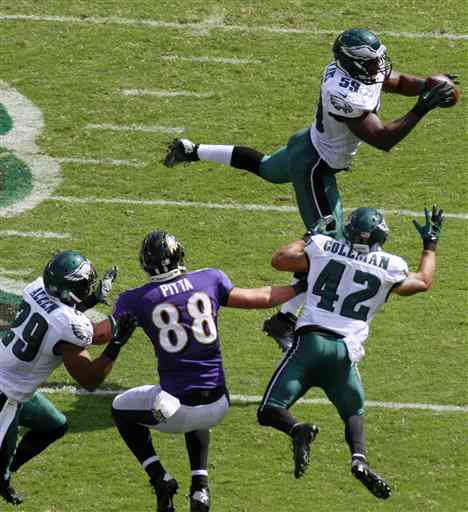 Last year every other word from Eagles fans was about incompetence of the the Eagles defense and their new defensive coordinator Juan Castillo, along with their inability to hold a lead.  Things have changed demonstrably.

In the first two games of the season, the Birds defense and more specifically their nickel defense is amongst the best in the league.  They have closed out games against both the Browns and the Ravens.  I would have to put them up there with the 49ers defense, which shut down the Packers and Lions in successive weeks.

On every play it seems that their secondary and linebackers are climbing all over the other team’s receivers, while their pass rush surrounds the quarterback.  The leader of the Eagles defense and one of the changes, middle linebacker DeMeco Ryans described the nickel unit yesterday.

It’s amazing that making changes at the two linebacker positions, nickel back and left cornerback has made such a difference.

CHANGE AT THE TWO LINEBACKER POSITIONS:

Last year the Birds started off the season with rookie Casey Matthews playing some of the nickel snaps along with Jamar Chaney, Akeem Jordan and fellow rookie Brian Rolle.  It was a rotation which was what they planned on continuing this year until Ryans and rookie linebacker Mychal Kendricks started locking down receivers in Cleveland.

So far Ryans and Kendricks have locked down tight ends and running backs in nickel situations.  I think the key is the experience of Ryans.  He’s able to anticipate what teams are going to do against them and it makes a big difference.  You can see that Kendricks and the rest of the defensive unit listen to his every word because he’s been there and done that.

Numerous times in the Ravens game, the two linebacker were tackling running back Ray Rice or tight end Dennis Pitta before they could get first downs.

The veteran and rookie linebackers, who had played well against the Browns, played even better against the Ravens, so the rotating idea seemed to have been jettisoned and rightfully so.   Sometime rotating is a way of saying we really don’t have anybody good enough to play this position.   I think Ryans and Kendricks have shown everybody that they are indeed good enough to do the job.

CHANGE AT THE NICKEL BACK POSITION:

Joselio Hanson is a very heady player, who was able to be successful most of the time because of his ability to anticipate plays and be technically sound.  Hanson was always very physical with his jams, which would take the slot receiver out of some routes.

Rookie Brandon Boykin is just as physical and maybe even moreso, but he also has the ability to run with these receivers.  He has catch up speed, which is the ability to recover on routes when he is initially beaten.  Hanson doesn’t have that type of speed, so the nickel defense got more athletic by adding Boykin.

At times, teams could expose Hanson by forcing him to run and chase a receiver across the field or on a deep route.  Boykin will have no problem running with the slot receivers in the league across the field or downfield on a deep route  He’s faster and quicker than any slot receiver he must cover, which gives him an advantage and will allow him to use his speed to recover on any play.  Any time the quarterback throws the ball to his slot receiver, Boykin is capable of running down the football and knocking it down or picking it off.

I love Boykin’s football savvy and competitiveness which are qualities that Hanson survived on.  The fact that Boykin is a much better athlete has made the Birds nickel defense much better.

CHANGE AT THE LEFT CORNERBACK POSITION

A year ago , the Birds had two cornerbacks who didn’t fit together, in fact they were total opposites.  Asante Samuel didn’t like to cover wide receivers up at the line of scrimmage in press technique.  He preferred to back off of them and read the receiver as well as the quarterback.

Nmandi Asomugha on the other hand, didn’t like to back off a receiver and cover him in the way that Samuel did.  Asomugha prefers to get up into a receiver’s face in press technique and take him out of the route by jamming him at the snap of the ball and delaying his release.

They have both had a lot of success in the NFL but they didn’t fit together in the same secondary.

Former Arizona Cardinal Dominique Rodgers-Cromartie has taken over at the left cornerback for the Eagles in place of Samuel and he’s just as comfortable playing off of a receiver as he is moving up into his face and jamming him.

Now, both of the Eagles cornerbacks are comfortable in press technique as compared to a year ago, Samuel would refuse to move up into the press position.

The Eagles love to move their cornerbacks up into press technique because it puts timesqueeze on the quarterback.  It causes a sense of panic for opposing quarterbacks when they drop into the pocket and see their wide receivers being held up at the line of scrimmage.  QB’s have a clock ticking in their heads when the ball is snapped the worst thing you can do to them is hold up their receivers as the Eagles pass rush is closing in on them.

Ryans singled out the cornerbacks as being one of the keys to their excellent nickel defense.

“There’s a lot of pressure on our corners”, Ryans said. “It’s a luxury to have two great corners like we have, who can go up and defend anybody.  I’m just happy that those guys are on my team.  We have that luxury so we can do a lot more things and allow those guys to do what they do best and that’s locking guys up outside.”

The Special Teams Could Cost The Eagles This Week

Some would consider the addition of Todd Bowles as a pretty significant change.

For those that wanted Spags over Castillo, would u still rather have him after these first two games?

I wouldn’t consider that after two games any more than I’d consider marrying a woman after two dates.

The defense is so talented its kind of hard to mess this up. No scheme needed. Safetys safetys zone. Corners jam. Lbs play man. Demeco anticipates the play and. Alls it out. Wide 9 gets to the corner back in 4 seconds. What exactly does Juan have to do.

What does Juan have to do? Really?

I watched NFL Turning point last night with Dan Patrick and the first game that they featured was the Birds game. They focused a lot on Ryans because he had such a great game, but the thing that I noticed was the Kendricks was around him constantly on the sideline and on the field. They were talking, joking and planning together the whole game plus Ryans was more often than not pumping up Kendricks on where he was supposed to be and what his priority was. I know that this is what a MLB is supposed to do, but it was awesome to see Ryans working so much with Kendricks and to see the kid all ears. Kendricks can be a special player, and I think that Ryans can help him get there.

yes I concur that Todd Bowles played a major role in deffensive improvement. Mr Babin was invisible vs Ravens, as he is vs most quality teams.

Sorry Mel, but to not give credit to Castillo is absurd. He can’t go from being incompetent and the reason for the D’s issues last year and then turn around and give 0 credit when the D has performed like one of the better units in the league so far this year. Yes, they have a tremendous amount of talent to work with, but so did Jim Johnson for many of his defense’s best years and no one seemed to rationalize away the credit he deserved. The unconventional promotion of an offensive line coach to defensive coordinator is mostly to blame for the incompetence label that got hung on Castillo. Ok, fine. But when they turn things around, it is pretty offensive to not give credit to him as if he really has nothing to do with it. That same logic would mean that he was unfairly blamed for the defense’s failures last year. Anybody willing to go there?

Charlton – agree on Bowles. Couldn’t disagree more on Babin. There is more to playing DE than getting sacks. Anybody who understands the true beastness that is Trent Cole understands that. Babin so far has stepped his game up against the run. The eye in the sky does not lie. Also, expect Brandon Graham’s snaps to increase significantly against the Cards. He has more than earned it. He has done more in 13 plays in 2012 than many starting DE’s in the league playing 75-100% of their teams snaps. Again, the eye in the sky does not lie.

I Need to see more out of Nhamdi. Let him cover Fitzgerald the entire game, and lets see if he produces. If he fails, I would say he is over hyped and way over paid. Look for a replacement in 2013.

I for 1 slammed Juan…. I also slammed everything they have done on the D side of the ball for much of the last 10 or so years because they had been playing soft D and focused 100 % on turnovers. Something has changed this year…. they are back to being the kind of D we had 20 years ago. Knock em out, hit em hard, press cov D. I was right about Juan last year and so far wrong about him this year and i could not be happier about it. Go birds.

Theone1, no way they put 21 on Fitz, he has trouble finding the ball when its in the air. Fitz would have a field day on jump balls.

sorry for the typo make that 24 won’t be covering Fitz one on one.