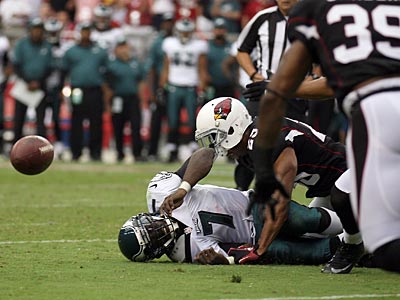 Careless Football Finally Catches Up With The Eagles

The Eagles survived nine turnovers in the first two games of the season, but today they were unable to overcome three lost fumbles to the Cardinals.

Michael Vick lost two, and Damaris Johnson lost another on a punt return. Vick’s fumble at the end of the second half turned out to be the deathblow for this team today. We may be talking about an entirely differently game if the Eagles go into the half down 17-7. Instead, what you have was a backbreaking moment that more or less took Philadelphia out of the game.

The quarterback once again showed one of his biggest issues, the inability to recognize a blitz. Vick had no idea that pressure would be coming, and its something that he’s always going to struggle with.

You can’t win in this league with turnovers. The Eagles proved that last season, and they could easily be 0-3 had several things not broken their way against the Browns and Ravens.

This Was Andy At His Worst

Andy Reid called a great game in Week 2 against Baltimore. He made a concentrated effort to establish the run early in the game, taking pressure off of Michael Vick and setting the quarterback up for success later in the game.

Today, Reid was uninterested in getting the ground game going. While the game was close, the head coach called just five running plays in the first half. With the offense predictable, the Cardinals were able to take advantage of Vick’s inability to read a blitz, and teed off on the veteran all day.

Can anyone justify Reid’s decision to kick a field goal on fourth and five in the second half? It was easily the most baffling, bizarre decision in the game. A field goal that late in the game with the team down by three touchdowns does very little good. The Eagles needed a touchdown to have serious ideas about coming back and tying the game. Reid may as well have waved the white flag right then and there.

This is a frustrating game to see the Eagles lose. They had a great opportunity to go to 3-0, and give them a little more room for error in their quest to return to the playoffs. Now the Eagles have not only lost a game within the conference, but the Cardinals now have the head-to-head tiebreaker on them. By defeating the Patriots and Eagles in back-to-back weeks, I think that Arizona has proven that they shouldn’t be taken lightly, and they’re going to be a surprise team in the NFC playoff picture.

Hopefully this game serves as a wake-up call for this team that their mistake-prone ways have got to change. The New York Giants come to town next weekend fresh off of a thrashing of the Carolina Panthers, and another performance with three or more turnovers is a formula for another loss.