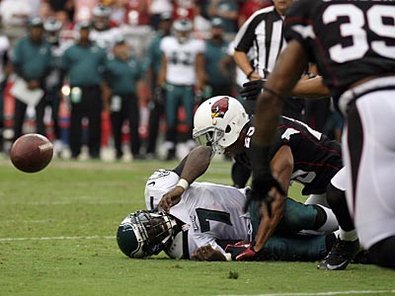 The Eagles played with fire in the first games of the season and were able to get away with it.  They had turned the ball over nine times in wins against the Cleveland Browns and the Baltimore Ravens

The Arizona Cardinals showed the rest of the National Football League the game plan to utilize if you want to beat the Philadelphia Eagles.  You have to force them to turn the football over and you have to limit your own turnovers.

First of all, you have to attack the Eagles offense by putting pressure on quarterback Michael Vick and forcing him to turn the ball over by fumbling or throwing interceptions.  Vick laid the ball on the ground twice today which were key plays that allowed the Cardinals to jump out to a 24-0 lead.

The first turnover was forced by Arizona when they pulled the ball out of rookie punt returner Damaris Johnson’s hands to force a fumble.  Arizona turned that turnover into seven points to give them a 10-0 lead.

One of the big plays in the game came when the Birds were on the three-yard line and about to make the score much closer at the end of the first half.   Vick dropped into the pocket and looked to his right and waited for one of the his receivers to get open.  He had no idea that there was a safety coming on a blitz from his blind side and he was unaccounted for in the Birds blocking system.

The Eagles quarterback got blasted from his left side by Arizona safety Kerry Rhodes.  Cardinals defensive back James Sanders picked the ball up and ran 93 yards for a touchdown, which changed the game dramatically. It made the chances of the Eagles coming back much harder than it had been were the Eagles to have scored on that play and made the score 17-7.  Instead the scored was now 24-0.

Vick completed 17 of 37 passes for 217 yards with no touchdowns and no interceptions.  He completed only 45.9% of his passes for a 64.8 quarterback rating.

The Cardinals led by their defense dominated the Eagles with the physicality of their defensive linemen and linebackers.  They limited the yardage gained by McCoy.  He gained 70 yards on 13 carries.

Arizona speedy cornerback Patrick Peterson virtually eliminated DeSean Jackson, who is the Birds number one deep threat.  Vick tried to get the ball to Jackson a couple of times on deep routes, but was unsuccessful in both attempts.

Another key to the game was the play of former Eagles quarterback Kevin Kolb.  He executed their conservative game plan of running the football and throwing short passes so that Kolb could quickly get the football out of his hands. The Cardinals didn’t want to expose their offense to turnovers by trying to throw the football deep.  taking many chances or turning the football over against the Birds tough pass rush and talented secondary.

Kolb threw a pass in the red zone which should have been picked off by Eagles middle linebacker DeMeco Ryans.  The linebacker cut in front of rookie wide receiver Michael Floyd to pick the ball off, but he let it go through his hands.  Dominique Rodgers-Cromartie also had a shot at the ball, but it got by him and Floyd caught the deflection for a touchdown.

Instead of the ball being picked off and the Cardinals being denied a scoring opportunity, Floyd went in for the touchdown to give Arizona a 10-0 lead.