The Clock Is Ticking On Michael Vick 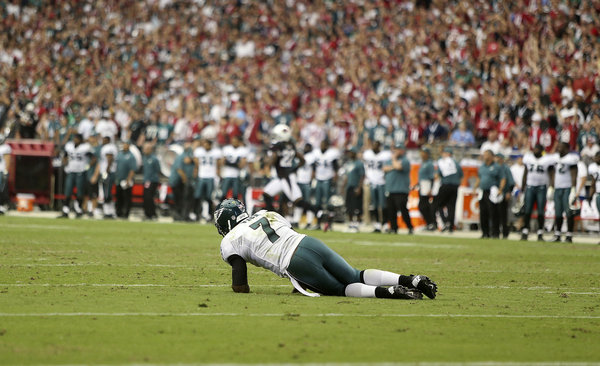 Last night, Andy Reid was trying to back off the statement he made yesterday about who will be playing quarterback for the Philadelphia Eagles going forward.

“Right now, we’re with Michael and that’s what we’re doing,” Reid said. “We’ll evaluate it as we go.”

Last night he was on 94WIP and he had changed his tune.

The first statement by Reid let us know that he has at least thought about making a change at the quarterback position.  There’s nothing he can say which can clean that up.

It wasn’t a major revelation to me because I don’t see any way he could not have thought about making a change at quarterback when you consider all the turnovers which have been occurring when the Birds have the football.

It’s getting harder and harder to argue that the “true” Michael Vick is the quarterback who lit up the NFL for most of the 2010 season, rather than the turnover machine who played for the Eagles last season and is still running the Birds offense right now.  Yes, you can blame Reid and Marty Mornhinweg for throwing the ball too much, but you can’t blame them for the horrible decisions which Vick has been making.

An experienced quarterback like Vick should have seen Arizona safety Kerry Rhodes coming off the corner on the last play of the half.  I saw him and I was looking at the game on television.  An inexperienced quarterback can’t be staring down receivers and throwing four interceptions in a game, then following that up with another game of more turnovers, then another game of more turnovers.

I know the Eagles won the first two games of this season, but it’s a fact that you can’t win consistently in the National Football League, if you’re leading the league in turnovers.

Vick currently has a 66.3 quarterback rating, which is near the bottom of the league, with six interceptions and three fumbles in only three games.  It’s step up time for Mr. Vick, there’s no other way to put it.

If Reid doesn’t start to believe that Vick can take this team to the playoffs this season, he’s probably going to replace him.

Reid On Vick: “Right now, we’re with Michael…. We’ll evaluate it as we go”

No surprise here at all, most us know (including Vick and Coach AR) that his play and the teams success or failure for 2012 will decide both of their futures as far as remaing with the Eagles.. Is Vick pressing too much, who knows but when you look at the totalitry of his 10 Year Career (Minus the Golden 6 Week stretch of Oct/November 2010) Vick has played pretty close to his Career #’s… which is a high-risk/high reward type of Player who has never grown or show the consistency and smarts to be a real winner in the NFL.. Take out that phenomenal stretch of ball he playes in 2010 from Oct to mid November, take out those 6 games or so and look at his other starts while in Philly and there are some pretty ugly games and perfromances where his decision making, poor ball security have actually cost the Eagles many games ( I look at the Bears and Vikings games of 2010, the BIlls,Bears, Cardinals, 1st Giants game of 2011 and now you see 3 poor performances to start the 2012 season..)
Career wise- Vick Stats have never been that good as far as his Completion % or his Turnovers Ratio.. Yes he’s exciting and a great Athlete who happens to play the QB position, to say he is an Elite QB or even a Top #10 QB is a real stretch..
This 2012 Season Vick is currently ranks at #29 out of #32 QB with only
Jay Cutler and 2 Rookies (Weeden and Tannehill) are the only QB’s ranked below him
Another interesting Stat and probably more reflective of how Efficient and Clutch a QB is the new “QBR Rating System” which takes every play in account that a QB is involved in and is just not based on Yards Thrown,TD,s and Turnovers and is Scored out of a 100 but is more weighted in actual performance of a QB (3rd Down Efficiency, Red Zone Efficiency, when and where are the Turnovers, How is Play/Production at the end of a half and at the end of a game, negative plays, postive plays, etc,etc) .. Vick has a Score of 38.8 which is again one of th e NFL’s lowest scores of all Starting QB’s

The more I think about this the more I think the time may be halftime of the Giants game for Foles if Vick continues his elementary play. I am not a fan of throwing a 3rd round draft pick rookie into the fire this early in the season and his career but the kid Foles showed he could play in the preseason (so did russel wilson and that isnt working out though). However, you can get any worse QB play then we have for the the 1st 3 games of the season, you cant. At this moment I believe Foles would have been better in every single statistical category than Vick if he played the first 3 games. Another plus if they bring in Foles is they will go to the basics at least initially which means more McCoy!