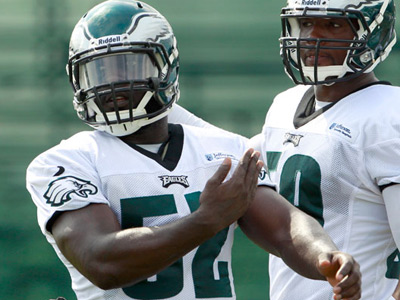 A week ago, Brian Rolle was preparing to possibly start for the Eagles at weakside linebacker with Akeem Jordan battling a hamstring injury. After the special teams turned in such a dreadful performance on Sunday night, someone had to be the fall guy for allowing David Wilson to averaging over 36 yards a return. That fall-guy was linebacker Rolle, who was released today by the Eagles.

A year ago, Rolle started 13 games for the Eagles as a rookie, and seemed to be the lone bright spot of the 2011 linebackers racking up 54 tackles with a sack, a forced fumble, and a fumble recovery that he returned for a touchdown against the Chicago Bears. There was reason to believe that the young weakside linebacker would take a big step forward playing with DeMeco Ryans and Mychal Kendricks in 2012, but the opposite turned out to be true.

Rolle took no steps forward, and put himself on the fast track to the NFL unemployment line. He entered training camp as the starter on the weakside, but his poor play caused him to lose his job to steady but unspectacular veteran Akeem Jordan. He still managed to make the team, but he had clearly fallen out of favor with the coaching staff.

Adrian Moten replaces Rolle on the roster. Moten has spent time with the Colts and Seahawks, and will be expected to contribute on special teams right away.

Look to see Rolle on the Colts sometime this week.

They need to fire the Special Teams coach too…you cant tell me this is all #52 fault??? The entire special teams was a disgrace on sunday night and it starts with the ST coach.

I can give one poor performance a pass…the kick coverage group has been solid over the past few years, and they were without one of their key players (Akeem Jordan) on Sunday. But there’s no doubt that Bobby April has been a disappointment since joining the Eagles several years ago. This was a coach that was billed as one of the best in the league, and while he hasn’t been a failure by any means, he hasn’t lived up to the hype. How many years has it been since the Eagles have had a solid kickoff returner that is a consistent threat to get ball past the 30-yard line? Since April has arrived he hasn’t been able to do anything to pump up one of the most ineffective kick return teams in the league.

need to fire – need to fire – need to fire – yeah – that’s what teams in first place need to do – start firing coaches! guess TAlon grip doesn;t realize the FG team is part of special teams and went 4 for 4 including the game winner with less then 2 minutes on the clock.. yeah the ‘ENTIRE’ special teams – nothing like the drama queens on this site to make 3-1 and first place sound like shit.. I don;t think any ‘placed it all on 52’ but is he performing as a LB? from the sound of the article – he hasn;t been performing at all.. now, get Anderson and RIley back – add some new blood (I like McBriar) and lets see what happens –

Another Idiot Eagle wannabe navyeaglefan….is this how everyone on this site is instead of making a comment regarding the article you decide to take a cheapshot at me…I’ll bet anything you have never even played football. Hell armyeaglefan (LOL) YOU CAN coach the ST in Philadelphia and tell kicker to attempt a FG. Its morons like you who agree with AR and his entire staff that make people not take Eagle fans serious.

no talon – you are the idiot newbie – cause if you had been around you would know (I get accused of braggin and posting my resume) that I played Divison I football at Navy (used to block fo a cool cat named Napolean Macallum!) and coached up through the Junior College level and actually was offered a Division 2 O Line coaching job) and now I spend my Thursday Friday and Saturday ref-ing – so I get to see the gamit of idiot think they know everything jackasses that make stupid comments each and every week – you sound as lame as those pop warner coaches that watched ‘Remember the Titans’ and scream ‘Leave no doubt’

but clealry now your vagina is sore – don;t worry, just wash the sand out – don;t act like a whiney bitch – you won;t get treated like a whiney bitch see its bitchy no nothing assholes like you that make most people outside of Philadelphia think philadelphia sports fans – fans that will post nonsensical negative bullshit about a team that is 3-1 and in first place..

hang in there newbie, maybe a couple more stupid posts and you can join Songs as the lamest jackass on the site

Sand in the Vagina, is very abrasive on the penis! OUCH!!! LMFBO!!!!

Brian Rolle have proven to be a better player than Matthews ….So why Matthews still have a spot?

Rolle should have been gone before the season. I’m glad to see that they are finally after 14 years, taking the LB position seriously. Getting rid of all of the smurfs. It’s a shame that they didn’t keep Clayton & give him a better shot. Little bigger, & seemed to be better in the coverage teams at Lehigh. Oh well! I like Kendricks alot, & makes plys all over the field, but would rather see him at WILL, where he would be an even bigger weapon, & us have a bigger coverage LB at the SAM. Hey at least we got 2 solid LB’s now, instead of the abortions we had starting last year. Bring on Rapistberger!

armyeaglefan are you kidding me??? Take Napoleon’s NUTS out of your mouth This is your style? dropping Titles and names??? If you accomplished so much why arent you playing somewhere?? or better yet why arent you coaching somewhere instead of trying to impress me with your Title and who you blocked for. I guarantee you Napoleon isnt talking about you….and I seen him on TV the other day where were you?

OK Newbie – I will answer your fair questions civily –

No — I am not kidding you

My style.. my ‘style’ is to call bullshit when I read bullshit – you dumbass – opened the door when you posted ‘I will bet anything you never even played football’ – I actually just got inducted into my HS Hall af Fame – I played Div I so if you were to have actually bet anything you would have lost badly

Why aren;t I playing anywhere… what an absolutley stupid question – Furst off – I graduated from NAvy – so, like that dude Chad Hall – I had a miltiary commitment. – but your comment proves that you are clueless about moving from HS to college – I coached in college and it is amazing to watch all the HS superstars show up and get there asses handed to them when the move up with the big boys – very humbling – I am also not playing cause – in case you missed it by the Nap reference – I was in college in the 80’s – kinda getting a little old to be a Guard in the NFL…

Why aren;t I coaching – I get offers but not interested. Coaching takes an absolute assload of time and is physically and emotionally draining.. if you do youth (AYF or pop warner), no pay and the parents, HS, pay a little but need to leave work early every single day in Aug, Sept, Oct Nov – and wife is not happy you are pissing away vaca time for summer camp. Oh – the pay is minimal at best and then still have to deal with parents who still haven;t discovered little Johnny is NOT the next Peyton Manning –

College – LOVED coaching in college – no parents to deal with, you can curse, and the kids really want to be there (daddy did not make them sign up or their friends are on the team) Pay is still pretty shitty, but the worst part about college is the recruitng and traveling to recruit… parents and kids all think there 6’2 205 lb all apple league TE son should be going to USC or UCLA vice becoming a JUCO transfer.. As for moving up – again – your ignorance shows – most college coaches change jobs frequently as the move up a division for a lesser job (from OC at JC to OL at Div III etc. as the move up. Most of today’s coaches went into coaching right away as GRad Assistants. There wives joined in route – my wife after a long military career was not so into the moving again every few years thing. The Div II job I was offered was in a place where the average temp from Nov to Jan was 15 degrees and wifey was not going to buy that –

so – I turned to ref ing – I recommend it for anyone that wants to stay involved in the game – pay is decent – I did two good varsity games on Friday and get 71 bucks a game – the best money is in little kids flag football – I almost (almost) feel guilty taking that money – don’t have near the time commitment, and best part as I said – you get to be in the middle of the field listening to idiots that have no clue what the rules are screaming about some call they heard Joe Buck talk about…

You are right – I am sure Nap is NOT talking about me, then again did anyone ask him to name his OLine… just saying everything in context..

as for impressing you – don;t flatter yourself jackass – no one on here gives a shit about you.. but when I post this – those guys that guys that know and understand football know I speak from experience not just emotional knee jerk reactions.

So princess – enjoy the rest of your day.

talongrip he is simply stating that if you’ve played and coached you never get on a site saying ‘fire him’ etc– and you would know and understand that there is a lot more to it. you would know that sometimes the ball bounces funny, you would know that the guys on the other sideline are getting paid too. Its not as simple as you and some of the other whiners make it sound.

Respect to hac for explaining it to him like was 2

given his language and ideas i was thinking he was about 12– a frustrated middle school kid!

i would like April to talk to Johnson and tell him to stop fielding punts inside the 10 yard line. Or actually yell at him.