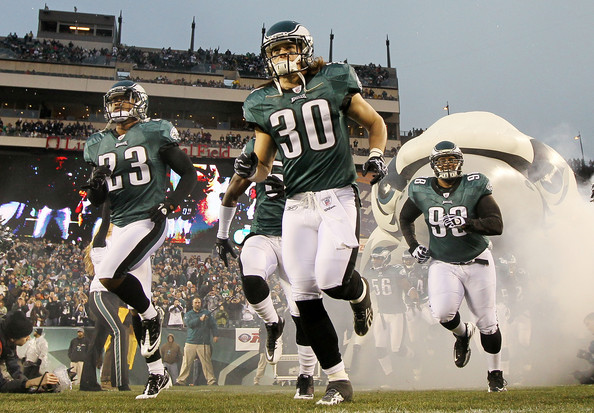 The Eagles were back at work today and their best Special Teams player Colt Anderson was back in action.  The Birds need him immediately on their kickoff team.

He said special teams are nothing but a bunch of one-on-one battles.  There’s going to be pressure on him to make an difference right away.

Backup wide receiver Riley Cooper was back in action.  He gives the Birds more depth at the wide receiver position and he’ll also be a help on the Special Teams.

It wasn’t a shocker today for anyone to find out that Eagles left tackle Demetress Bell continued to be the starter, although the previous starter King Dunlap is healthy again and practicing.

Special teams getting better with the healthy bodies

Eagles need to do the following Roster Moves

Pittsburgh gets back Polamalu, Harrison & Mendenhall, & we get back Anderson, Cooper & Duncrap. I just thought that was funny! Bring on Rapistberger!

Pman- I would love the Rau move. That dude would kill it on special teams even if he didn’t get on the field in many other situations.

I think RB Lewis and LB Matthews are wasted Roster Spots and the Eagles can use more depth to sure uip SPecial Teams..
With the Punt/Kickoff Return Duties being handles by Johnson & Boykin
and any back-up Running PLay duties likely to go to Bryce Brown, why is Dion LEwis still on the Roster… I would like to see the Eagles use Polk for some carries as well.. and it appears FB Havilli may get a couple of touches a game also makin Lewis more of a non-factor and a wasted Roster Spot

Agree with you 100%. Lewis hasn’t seen the field yet so why keep him. Same with Mathews.

Havili made a big difference in the Giants game, and I would like to see him get some carries for a change of pace and to keep the defense honest.