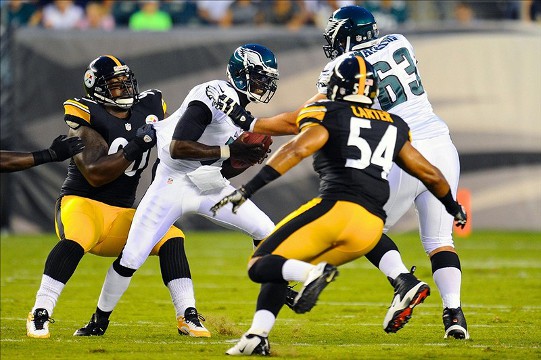 Eagles Must Be Prepared To Face A Desperate Pittsburgh Team

The 2012 season hasn’t gotten off to a great start for the Pittsburgh Steelers. They’ve begun the year with a 1-2 record, falling to the Denver Broncos and Oakland Raiders. They’ve been bitten badly by the injury bug, and have seen key figures like Troy Polamalu, James Harrison, and Rashard Mendenhall miss time with various ailments.

The Steelers are a proud team, and much better than their record suggests. They’re now fresh off of their bye week, and have had two weeks to sit and think about their embarrassing loss to the Raiders. With many of their injured stars set to return to the lineup this week, Pittsburgh will be ready to perform in what is an early season must-win situation for them.

This is the first time this year that the Eagles will play a team whose back is up against the wall. We’re at the point in the year where the teams that have gotten off to slow starts need victories badly in order to keep their playoff hopes alive.

How The Eagles Can Beat The Steelers

Two weeks ago, the Eagles were spanked in Arizona by what many considered to be an inferior Cardinals team.

Michael Vick and the offense were unable to get into a rhythm in throughout the game because of the blitzes that Cardinals defensive coordinator Ray Horton threw at them. Both Horton and head coach Ken Wisenhunt came to Arizona after succeeding as assistant coaches in Pittsburgh.

The Steelers and Cardinals run similar defensive schemes, and Eagles fans can expect Dick Lebeau to copy Horton’s plan of attack. Vick will see constant pressure coming his way from all angles, and he must be prepared to recognize when an attack is coming, where it is coming from, and how to properly adjust to it.

Andy Reid and Marty Mornhinweg must avoid falling into the same trap that they did to the Cardinals, and call an offensive attack that leans heavily on LeSean McCoy and running game. Hopefully the Eagles will implement a gameplan similar to the one they had against the Giants, and operate heavily out of the I-formation with a strong mix of run and pass to keep the Pittsburgh defense off balance and honest.

The Steelers defense isn’t the elite, shutdown unit it once was, and the Eagles may be able to take advantage of some favorable matchups in the secondary for their younger receivers.

Defensively, the Eagles have a chance to make the Pittsburgh offense one-dimensional and predictable. The Steeler running game has been one of the worst in the league this year. They’ll get a boost from the return of starter Rashard Mendenhall, but there’s no telling just how effective the former first-round pick will be in his first game back from an ACL injury. If the Eagles can grab an early lead and shut down Pittsburgh’s early attempts to run, they’ll force the Steelers to lean heavily on the passing attack. Their offense would then become a little more predictable, and Juan Castillo’s defense will have an easier time shutting down the pass.

The Philadelphia pass rush has to be much better than they were against the Giants. It won’t be good enough just to get a couple of hurries on Ben Roethlisberger, the defensive lineman need to play a dominate game and consistently get in the face of the Steeler quarterback. If the two-time Super Bowl champion quarterback has the same amount of time to throw that Eli Manning did, he’ll be able to pick this defense apart.

Why The Steelers Will Win

Pittsburgh will play a strong, physical game on both sides of the ball, and they have almost all of the intangible factors on their side as well.

Offensively, they need to take advantage of Rashard Mendenhall’s return and try to develop a physically imposing running game that can wear the Eagles defense down. If they’re able to do that, it will help open more options up for speedy receivers Mike Wallace and Antonio Brown.

Defensively, the Steelers are going to make it their mission to rough up the Eagles’ offensive talent. They’re going to send everything they’ve got at Michael Vick, and try to get the veteran quarterback to spend most of the afternoon on his back. Their battle-tested defense, led by guys like Troy Polamalu and James Harrison, should be able to force turnover-prone Michael Vick into several mistakes.

The matchups on the field aren’t what really favor the Steelers in this game as much as the intangibles do.

As mentioned above, this is a game the Steelers really have to win. They can’t afford to fall to 1-3 and lose any more ground in the standings to the Baltimore Ravens and Cincinnati Bengals. An extra week of preparation, combined with their homefield advantage (Pittsburgh is one of the most difficult places in the league to play) really give Pittsburgh the edge.

I don’t expect the Eagles to win this game, but I’ll be curious to see how well they perform in this situation.

This is going to be an interesting game, and we’ll find out a lot about just how good the Eagles are. This is a situation in which the Steelers are expected to perform at a high level, and Philadelphia is primed for a letdown after an emotional win in a prime time game over one of their division rivals.

If the Eagles can overcome the Steelers in this situation, it could be the confirmation that many fans are looking for to determine whether or not this team has a great chance to make a deep playoff run.

Early Turnovers Cause Eagles To Come Up Short, 16-14