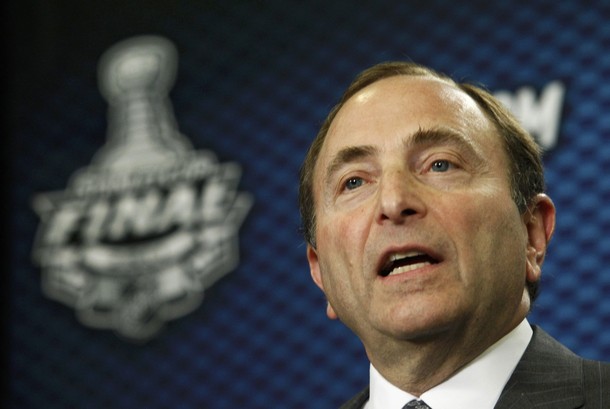 NHL Commissioner Gary Bettman announced this afternoon that, after weeks of requesting a counter proposal from the NHLPA, the NHL is extending their own revised offer to the players’ association for a new collective bargaining agreement.  Should the NHLPA accept the offer within ten days, the NHL maintains that they will be able to organize a condensed schedule with all 82 games and playoffs finishing before June 2013.

The season would begin November 2.

According to John Shannon of the Canadian network Sportsnet and Bob McKenzie of TSN, the new proposal from the NHL includes:

The proposal places another hard deadline on the table with more realistic starting points from the NHL than what was previously offered.  While a step in the right direction, the entirety of the NHL’s proposal has not been made public.  There may very well be additional points that could more negatively impact the players.

It has been noted by some outlets that while the 50/50 split is still going to be a hard sell for the NHLPA, the offer may be difficult to pass up for some players.

It is a tricky spot for the NHLPA, because if the players really just want to play, this is their chance to do so. The question that the players have to face is whether it is worth sacrificing the future in the name of the present, or the other way around. Factor in three months (and years before that) of building distrust for Bettman and the owners, and you can see that it’s premature to start canceling non-hockey plans for the first weekend of November.

I also don’t believe that the NHL will be able to have all of this resolved in ten days, with an 82-game schedule intact. A shortened season beginning on Black Friday, though?   That wouldn’t be out of the question.

What Does The Juan Castillo Firing Mean For Reid And The Eagles?

Get it done, you greedy BASTIDS! We are going to need something else to root for, because the Birds are just about done!

I rather watch the Russian Leagues anyways.. It’s just better quality and brand of Hockey that they play there.. The NHL level of Play has deteriorated jult like the NBA nad NFL has… Too many changings on Teams Rosters every season, too much $$$ invovled and too many big ego’s…

ESPN2 has aired a few KHL games. I may be biased, but I don’t think the level of play there compares at all to the NHL.

I agree Josh and was only kidding, the NHL is the best Hockey in the World without a doubt, even it’s recent water-down version (they need to eliminate 2 Franchises to tighten up the Talent Pool..