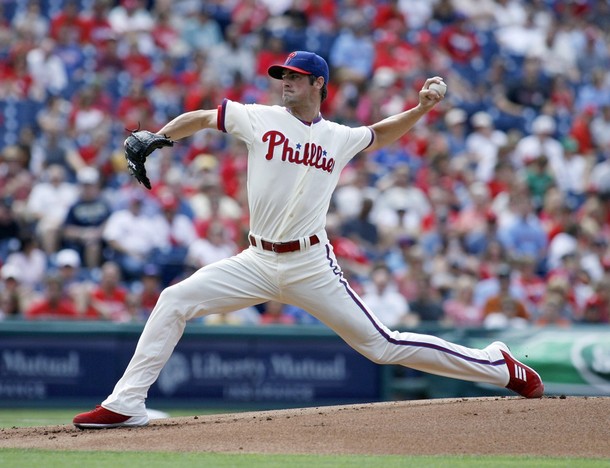 Everyone expected a big year from Cole Hamels. The starter was coming off of one of his best years as a major league starter, finishing the 2011 season with a 14-9 record and a 2.79 ERA.

With his contract set to expire, the general consensus was that Hamels would have a big season to put himself in prime position for a huge payday in free agency.

Hamels easily met all of the expectations that were set for him. He was the team’s best pitcher for most of the year, and finished with a career-high 17 wins. He lost only six games, and posted a 3.05 ERA.

With Roy Halladay battling shoulder problems and Cliff Lee struggling to find success on the mound, Hamels became the team’s ace this year. In most of his starts, he provided the team with an excellent chance to win, and was often the guy who stepped up and stopped losing streaks by shutting down opposing offenses.

Hamels showed us a tremendous amount of growth in his maturity this year. In years past, the lefty would allow himself to occasionally become frustrated and lose his focus if certain things didn’t go his way. Those moments of weakness are now beneath him, and he now keeps his head up high while pitching out of jams and keeping damage to a minimum.

Hamels made the All-Star team for the first time in his career, and gave the disappointing season a silver lining by committing himself to Philadelphia for the long-term by passing up his chance to test the open market and signing a massive contract extension with the Phillies.

The next year will be a very interesting one for Hamels.

With his contract extended, he’s now made himself the centerpiece of this team; the guy that the Phillies will build around for the next five years. He’ll be the guy getting the ball on Opening Day, and 2013 will be Hamels’ year to show that he isn’t just deserving of a contract worth over $100 million, but it is his chance to prove that his name deserves to be recognized across the league as one of the top-five pitchers in baseball.

As great as Hamels has been to this point in his career, I don’t think we’ve seen the best he has to offer yet. He’s still yet to reach his 30th birthday, and I think he still has a little further to go before he hits his ceiling as a pitcher.

I don’t think that a 20-win season, another All-Star appearance, and a possible Cy-Young Award are all out of the question for Hamels in 2013. The sky’s the limit for Cole, and this is his team now.

Nobody is untouchable, but if there’s anyone close to it, it’s Cole. Best pitcher we have, & keeps getting better. He should be a multiple 20 game winner, if thse abortions could ever give him run support. He gets the one of the worst team run supports in the majors.

Hamels is untouchable and will remain a Phillie for his Career..
Staff Rotation will be #1) Hamels #2) Doc #3) Lee and then #4 & #5 will be a combo of Worley,Kendricks and one or two of the younger Pitchers competing

Not counting Pence, Giants have 6 batters with .270 batting ave or more, Phillies this year, just 2 starting batters. Howard had a lovely .219

Sources of mine report GM Amaro is aving talks with Lance Berkman’s Agent to see if he has interested in Playing in Philly– 2 Year Deal for approx $15 Million.. He could play LF and a little 1B to spell Ryan.. He is a Switch Hitter who has always batted well at Citizens Bank Park and could be a nice 3rd or 5th Batter depending on Utley’s Health/Status

A Potential Line-up could be

No more platoons. All it did this year was keep everyone from getting comfortable.

Eek. Berkman can’t stay healthy anymore and he was a butcher in the OF before he got old. No thanks. Time for Ruf to be in LF full time. I would rather have a full time OF of Ruf in LF, Brown in CF and Sheirholtz in RF.

There is no OF FA that I am interested in with the contracts they could get unless they can get Shane back at a reasonable price and then let him bat 2nd all season. No more moving him around the lineup.

I am also ready to trade Cliff Lee while he has value to get rid of the contract. I am with DCAR in that they should be on the phone with Texas right now. You could go with Doc and Hamels 1-2 and then bring in a 2nd tier SP for now: Edwin Jackson even Kyle Losche.